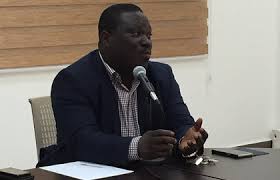 Economist and Senior Lecturer at the University of Ghana, Festus Ebo Turkson says statistics presented by the Vice President Dr Bawumia at a town hall meeting in Kumasi shows that the Ghanaian economy is back on track.

Speaking on Joy FM's news analysis show on Saturday, Dr Ebo Turkson said he has cross-checked the figures presented by Dr Bawumia and they are reliable.

Dr Bawumia among other things said President Akufo-Addo has kept his promise of reducing the country's rate of borrowing as compared to the previous NDC administration.

Addressing issues of the country's total debt stock which has hit 214.9 billion as at November 2019, Dr Bawumia explained that during their three years in office the country's debt stock increased by 79 percent as compared to the 247 percent from 2012 to 2016.

He strongly attributed the success to a positive primary balance and fiscal discipline in the economy.

"Let us look at what has happened to the debt as a result of this fiscal discipline that we have imposed on yourselves in achieving the positive primary balance. The total public debt has increased from 122 billion Cedis in 2016 to 214.9 billion in 2019 that is 9.3 percent of GDP at the end of November 2019, but this includes the cost of the banking sector cleanup which you know is over 13 billion Cedis and counting, excluding the cost of the banking sector cleanup the debt stock stands at 203 billion cedis however if you look at these debt dynamics the strong physical adjustment that has taken place and better debt management has meant that the rate of debt accumulation has slowed down considerably to the lowest in a decade. Between 2008 and 2012 Ghana debt stock increase by 267%, between 2012 and 2016 Ghana debt stock increase by another 247% but between 2017 and 2019 the increase has been by 79 percent so there is a big difference."

Felix Kwakye Ofosu said there is no difference in his presentation today and the ones you used to do when they were in opposition.

According to him, there was no excitement around the presentation as compared to when he was in opposition because most Ghanaians believe he will do nothing different.

Felix Kwakye Ofosu explained that there are some key indicators that most governments are measured with, that is exchange rate, inflation and growth rate.

With this, he said the NDC was able to achieve a growth rate of 14.4% which the NPP is yet to attain the same with single-digit inflation.

Dr Turkson said is not concerned about the comparisons made by the Vice President but the figures presented and how the economy is been worked on.Â

"The good thing is that this government tries to account to the people, the Vice President came with statistics to tell us how well they are doing, whether it is an election year and meant to be more of a political campaign strategy."

"For me what is important is not necessary the percentage of manifesto promises that have been made, what is important is what has happened to our economy over the last three years because whatever promises are made if the economy is not doing well you can't fulfil those promises. We need an economy that is stable and expanding, an economy that will give promise to investors to come and invest and that for me is the main thing."