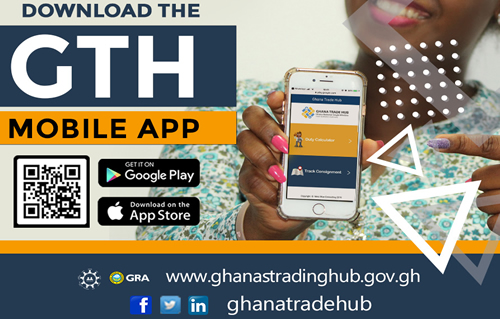 The Ghana Trade Hub Portal which was recently introduced by government has recorded high downloads within two months.

The App, which is available for Android and IOS users has recorded over 10,000 downloads since its inception in April 2019.

The APP was developed by West Blue consulting, one of the vendors providing single window operations at the port.

The introduction of the App has contributed to ease pf doing business at the ports and forms part of government’s paperless port agenda.

He said transparency is the underlined focus which aims to improve ways of doing business at the Ghana ports.

According to him, tracking of imports into Ghana and knowing the estimated payable duty has become a stress-free and easy task with the launch of the mobile software.

He noted that one remarkable feature is the duty calculator which gives clients an estimated cost of duties for consignment and general goods.

Mr Obideaba explained that the estimates although does not represent the exact or full cost of the duty on the consignments and general goods due to some charges which are not captured by the system .i.e. agents fee, network charges and etc, the system is designed to give importers about 90 to 95percent estimated cost of the duty. 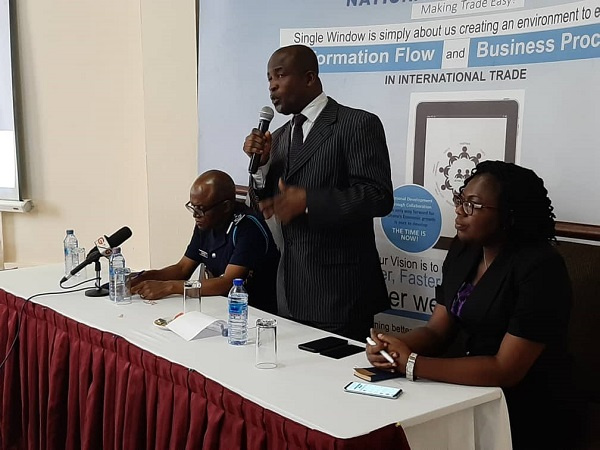 He added that importers will also have the opportunity to know the estimated cost of duties on imported vehicles with and without the 30percent reduction as well as the 50percent benchmark value for import duties for the sake transparency.

“It makes it very easy and simple for importers to track the status, movement and location of their expected consignment; be they general goods or vehicles and also to have foreknowledge of the amount duties that would be charged on such imports before clearance,” he stated.

According to him, players within the trade and imports sector can now check such information in the comfort of their homes or from anywhere in the world, without having to be physically present at the port.

Mr. Kwasi Bobie-Ansah said the essence of the media engagement is to update the public with relevant information about the hub portal and the mobile app as part of the paperless and digital reforms.

He urges the media to help educate the public about the new technology in order to reduce cost and time of doing business at the ports.

More about the App?

It has been largely embraced and described as a novelty and brilliant innovation in the trade and imports fraternity.

The Ghana Trade Hub Mobile App serves as a credible one-stop-shop for all trade information exchange and clearance processes.

In an attempt to transform Ghana’s ports to Smart Ports and strengthen Ghana’s economic competitiveness, there is an automation of the Certification of Origin for export; cancellation of the importer registration process and regulatory agencies for physical examination reduced from 16 to 3.

The integrated risk management system has reduced physical inspections of goods at the ports by 50 percent.

Another advantage of the Ghana Trade Hub Mobile App is that it enhances transparency and reduces human influence and interference; a challenge that had hitherto been abused to cause leakage in government revenue at the ports.

The free-to-download Ghana Trade Hub Mobile App is available on both Google Play store for Android users and on IOS- App store.

The Ghana Trade Hub Mobile App is easy to operate and the processes have been broken down into specifics, depending on whether one wants trade information on general goods, used vehicles or whether one simply wants to track a consignment.

For example, the App has four simple steps to follow so as to obtain duty information on general goods.

It is mandatory to download and open the App, select ‘Duty Calculator’ and then select ‘General Goods’ as the first three steps.

The fourth and final step is to key in the HS Code, Freight, Product Value, Ancillary Charges, ExWorks, select the currency and then click the ‘calculate button’ for the results to be displayed in the pop-up space.

The App is self-explanatory and easy to follow once downloaded. It, for instance, asks where the exact value of the consignment is not known, the user should just type ‘0’ as in zero.

It has two easy options to choose from to get estimated duties payable on used vehicles.

The first option is by using the make, model and year of the car to derive your duties. This option guides users to select the make of the vehicle, select the model of the vehicle, specify the year the vehicle was made and then press the ‘Find button’ for results to be displayed. The user may select ‘View Duty’ to view the total duty payable.

There is also the option of using the Chassis number of the vehicle. With the option, the user keys in the vehicle chassis number, clicks the ‘Decode’ button and selects ‘View Duty’ to view the total duty payable.

For users who wish to track their consignment, there are four simple steps which are the open the Ghana Trade Hub Mobile App, click on ‘Track Consignment’ and then sign up with TIN, email, phone number and passcode or login with TIN, email and passcode as the first three steps.

Users can also track consignment by selecting ‘Search’ by UCR and then insert a UCR and press submit to track that consignment.

The results of the search display a timeline of the selected UCR with the duty payable of that consignment.