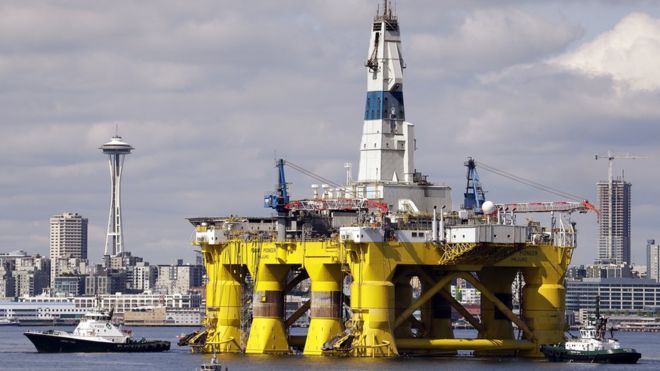 In what could be regarded as an incredibly bold move by a serving Chief executive in a close transition period, US President Barack Obama has permanently banned offshore oil and gas drilling in the "vast majority" of the US-owned northern waters.

Mr. Obama spelled-out areas in the Arctic as well as Atlantic oceans as "indefinitely off limits" to future leasing.

The move is widely regarded as an attempt to protect the region before President Obama leaves office January next year.

It is believed that members of Trump camp could find it difficult to reverse the decision.

The announcement was made alongside Canada which has also committed to a similar measure in its own Arctic waters.

The White House said the decision was for "a strong, sustainable and viable Arctic economy and ecosystem." It cited native cultural needs, wildlife concerns, and the "vulnerability" of the region to oil spills as some basis for the ban.

But while Canada’s ban will be subject to every five years, the White House insists Mr. Obama's declaration is permanent.

The decision is based on a 1953 law which grants the president the right to suspend leasing of offshore resources indefinitely.

Supporters of the Obama administration have already suggested that any attempt to reverse the "permanent" decision outlined by the law would be open to a legal challenge.

In reaction to the Arctic declaration, Friends of the Earth said: "No president has ever rescinded a previous president's permanent withdrawal of offshore areas from oil and gas development.

"If Donald Trump tries to reverse President Obama's withdrawals, he will find himself in court."

However, the American Petroleum Institute in a statement said, "there is no such thing as a permanent ban." It further expressed its hope that the Trump's administration would simply reverse the decision.

Furthermore, an environmental analyst, Roger Harrabin said the ban is a huge boost for conservation in the fragile waters of the Arctic - and for campaigners agitating for action against climate change.

The oil industry already has a significantly poor safety record in northern waters. In 1989 the tanker Exxon Valdez ran aground in Alaska, spilling hundreds of thousands of barrels of crude oil, polluting 1,300 miles of coastline. Some of the oil endures and have had devastating impact on animal species in the area. Recently in 2014, Shell's drilling rig the Kulluk also ran aground in the Arctic's tempestuous seas, resulting in a subsequent halt of the company’s exploration activities in the Artic. Northern waters are cold and scientist have proven that it takes bacteria much longer to break up oil products in the area than in the warm waters of the Gulf. And the drilling conditions are among the most challenging on Earth.

President Obama is said to be heeding advice from scientists who have warned that humans have already discovered three times more fossil fuels than we can burn without risking the climate. Despite this caution by the scientific community, Oil companies still want to explore for further profits and the next secretary of state, may offer the industry a route round the ban by paving the way to an Arctic drilling deal with Russia.

With Rex Tillerson, CEO of Exxon Mobil, named as his secretary of state, Rick Perry, whom as governor of Texas previously called for less regulation of the oil industry, as the President-elect’s choice for energy secretary, Mr. Trump has instigated fears among some environmental campaigners.

The Environmental groups have strongly criticized both appointments. Fairly low oil drilling activities currently takes place in the Arctic region, as it has been proven to be more expensive and difficult than other alternatives.

In a nutshell, in wouldn’t be out of place to credit the out-going President for his commitment to reducing the environmental threats of climate change driven largely by oil exploration activities around the world. He began his Presidency with the Gulf of Mexico fiasco and is now ending it with the artic: first a reactive measure and the later a proactive one.