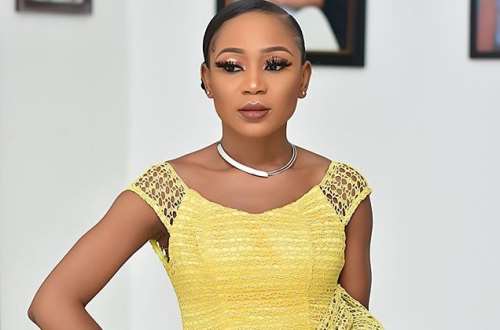 Ghanaian actress Rosemond Brown's fate would be determined today at the Circuit Court in Accra.

Rosemond Brown, popularly known as Akuapem Poloo, who has been charged with publication of nude pictures with her seven-year-old son earlier pleaded not guilty when she was first arraigned, but changed her plea on Wednesday, April 14, 2021.

She appeared before the court on the said date and pleaded guilty to all three charges and was convicted on her own plea by the court presided over by Her Honour Christina Cann.

However, the court deferred her sentencing to Friday, April 16, 2021, for her to undergo a pregnancy test in compliance with the law regarding a woman who has pleaded guilty in court.

READ ALSO: Video: Abena Korkor weeps as she announces her sack from TV3

She was however remanded into custody for the prosecution to take her to any Government hospital to conduct the pregnancy test.

When asked by the court if she still stands by her change of plea, she said yes, before she was remanded.

Rosemond who had displayed her naked picture with her son on social media on June 30, 2020 pleaded not guilty to all the charges.

Meanwhile, Ghanaians have started a campaign calling on the court to temper justice with mercy.

With the hashtag ‘#FreeAkuapemPoloo’, social media users such as Sarkodie, Efya, Akumaa Mama Zimbi and other Ghanaians are flooded social media with alternative punishment for the actress.

I beg you people in the name of God..
I believe it will do poloo more harm than Good..
Her son and mother will even suffer More if she’s Sent to Jail... #ForgiveAkuapemPoloo #FreeAkuapemPoloo pic.twitter.com/9nICU2Gki7

I think it’s a little harsh to separate a child from the mum just because of pictures taken ... would want to plead with the law to pardon our sister 🙏🏾 #FreeAkuapemPoloo

People really love akuapem poloo. She’s a free spirit and has encountered some bad luck in life. She doesn’t have bad intentions behind her mistakes. I don’t know her too well but I know she means well. I hope she comes out on top after this short-come. #FreeAkuapemPolo

As someone who grew up with a single mother the love is never the same when it’s not your real mum. Let’s pls forgive the mother so as not to adversely affect the son #FreeAkuapemPolo

Is separating or taking a child away from their mother the best solution? I pray she’s pardon #FreeAkuapemPolo

Where is the empathy and sympathy in some Ghanaians??🤦🏾‍♀️🤦🏾‍♀️i know what she did was wrong but come on. #FreeAkuapemPoloo