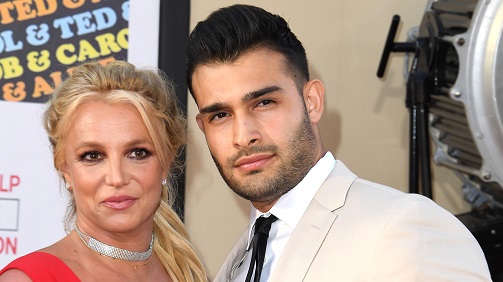 Britney Spears is set to marry her fiancé Sam Ashgari in an intimate wedding service today, sources close to the singer have revealed.

The 40-year-old star and her 28-year-old beau are expected to say 'I do' in front of a very small and exclusive guestlist - that does not include Britney's mum Lynne Spears, dad Jamie Spears or sister Jamie Lynn Spears.

According to TMZ, it has still to be decided who will walk Britney down the aisle, but she has invited brother Bryan who will be the only exception to her 'no family' rule.

Actor and model Sam popped the question to the Hit Me Baby One More Time hitmaker back in September, shortly after Britney was freed from her 13 year conservatorship.

Since then the pair have jetted off on numerous five star holidays, including Cabo, Cancun, Las Vegas and Hawaii.

In her latest Instagram video, Britney fuelled rumours she's set to marry for a third time today as she filmed herself supping champagne with Sam in the back of a chauffeur driver Rolls-Royce.

The star flashed a glimpse of her fresh manicure to the camera, with her nails decorated with white paint and jewels - in keeping with a bridal theme.

Speaking in a British accent, Britney announced: "This is my second time to ever be in Rolls Royce, I'm really excited... there are stars on the ceiling and tiny champagne glasses, which I've never had, that are very cold already.

"I feel very sophisticated with all the jewels on my hand," she told fans before flashing a hand to the camera.

"Toodle-oo my friends. Cheers," the pop star signed off before blowing a kiss.

Earlier this year, the Italian designer made a personal visit to Britney's Los Angeles home to work on their plans.

Britney first met husband to be Sam back on the set of her video Slumber Party in 2016, and the couple have rarely been apart since.

In April this year, Britney announced she was pregnant with her first child with Sam - which she sadly went on to miscarry.

Her wedding today will be the third time Britney has tied the knot, after previously getting hitched to Jason Alexander and Kevin Federline.

Britney first became a bride at the age of 23 in 2004 when she married childhood friend Jason in Las Vegas.

The marriage was over just as quickly as it began, with 55 hours in fact, as an annulment was swiftly granted on the grounds it had been a 'mistake.'

In the early hours of January 3, after a night of partying, a reunited Britney and Jason headed to the Little White Wedding Chapel in Sin City - with a lurid lime green stretch limo taking them to their destination.

Jason, who was also 23-years-old at the time, later told Access Hollywood: "It was just so crazy, man. We were just looking at each other and said: ‘Let’s do something wild, crazy. Let’s go get married, just for the hell of it!'"

Kevin proposed to the pop princess when his last girlfriend Shar Jackson was pregnant with his child.

According to Kevin, he met Britney at a club in Hollywood: "Ours eyes met and that was it."

They invited friends and family to a private party at their Los Angeles home, that was expected to celebrate their engagement - before the couple announced they were getting married.

Britney later revealed on her reality show Britney & Kevin: Chaotic, that her mum was "dumbfounded" by the unfolding events.

"She couldn't believe what was going on, and when she realised it, she was so cute. She didn't know what to say," Brit recalled.

After two years of marriage and welcoming two sons together, Britney filed for divorce in November 2006 citing 'irreconcilable differences.'