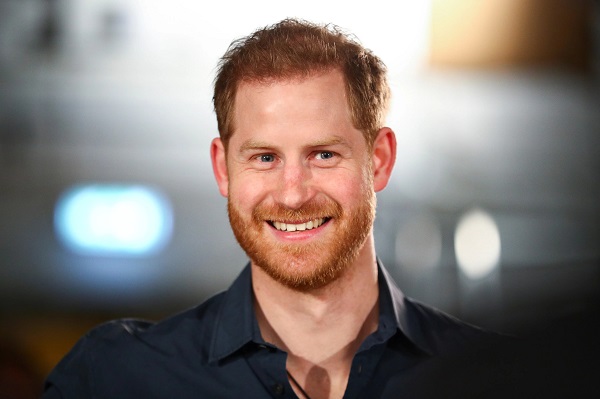 A casting agent has made a last minute call for an actor to play Prince Harry in the next Netflix series of The Crown.

The job ad, which expires on October 14, is searching for someone who has a strong physical resemblance to the Duke of Sussex - but no professional acting experience is necessary.

An actor between the ages of 16-20 is being sought and applicants are being told to email a short video of themselves talking about something they love as part of the process.
Shooting for series six of the popular drama will begin next month.

The job description reads: 'Robert Sterne, Casting Director of the Netflix series THE CROWN, is searching for an exceptional young actor to play PRINCE HARRY in the next series.

The casting call for William and Harry said the roles in the drama are 'significant' indicating there may be storylines effecting the young Princes' lives in the late nineties and early noughties.

The casting call indicates the series will run until at least 2005, likely starting around 1998 - just a year after Princess Diana's death.

In 1998, Prince Harry started school at the prestigious Eton College, Berkshire, where he was educated until he left in June 2003, aged 18, with two A-levels in Art and Geography.

After leaving school, he took a gap year where he spent three months working on a cattle station in southern Queensland, Australia, and two months in Lesotho, where he visited an orphanage for children with Aids.

In May 2005, aged 20, Prince Harry entered the Royal Military Academy Sandhurst to bein his training as an Officer Cadet.

Less than a year later, he joined the Blues and Royals, and was commissioned as an Army officer just six months before his 21st birthday.

An advert calling for the next Prince Harry advert - could it be you? Applicants are asked to email by Friday October 14.

'It is a significant role in this award-winning drama and we are looking for a strong physical resemblance.

'Shooting will commence November 2022 in the UK.

'No previous professional acting experience required. We are very experienced in providing a great deal of support for the young actors and their families through what they find is a uniquely rewarding creative process.' 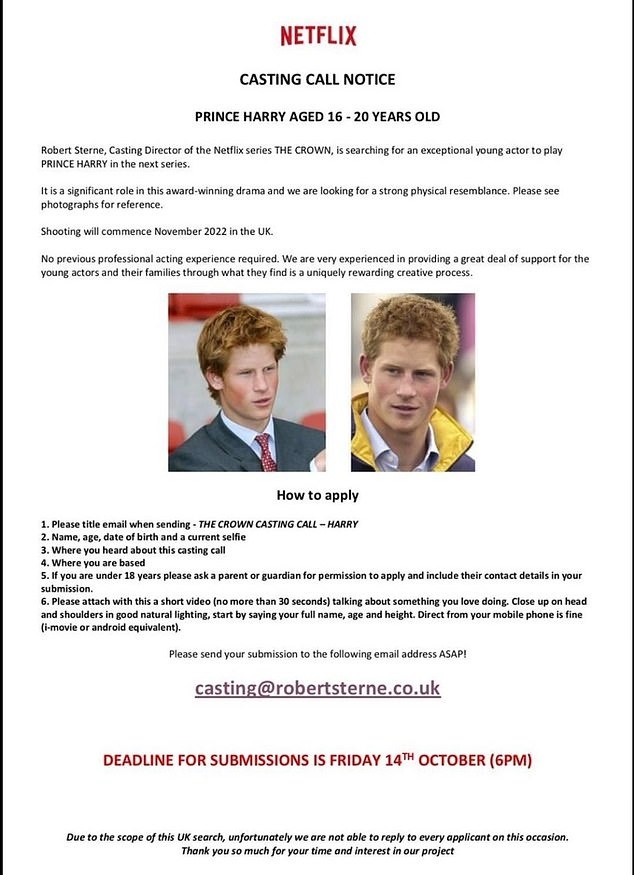 The casting call notice asks applicants to provide their name, age, date of birth, a selfie, where they heard of the job, where they are based, as well as permission from a parent or guardian for under 18s.
Earlier this month it was announced that The Crown have cast actress Meg Bellamy in the role of Kate Middleton for the upcoming series.

The Netflix show initially put out a casting call in April to find a 'stunning actress' to portray the role of a young Kate and after a five month wait, they finally found their Duchess.

Meg, who was head girl at St Crispin’s School where she studied drama, will star alongside Ed McVey, who has been cast as her onscreen husband Prince William.

Ed and Meg will play the couple during the period in which their romance blossomed while studying at St Andrews University.

The part of the future Queen Consort is Meg's first major acting role and comes just months after she left her comprehensive school in Wokingham.

Taking to Instagram after the news was revealed, an excited Meg wrote: 'Pinch me please... So excited to announce that I will be playing Kate Middleton in Series 6 of Netflix’s ‘The Crown’. It is such an honour to be joining the most incredible cast and crew, and I will strive to do Kate justice.'

In addition to Ed, Rufus Kampa, 16, will also play the Prince at a different stage in his life, depicting his teenage years showing how he and the royal family coped with the death of Princess Diana.

After his role was made public, Ed wrote on Instagram: 'Ahhhhh the big news is now out!!! I’m absolutely buzzing to be given the opportunity to play Prince William in #TheCrown in Series 6!!! Along side the amazing @megkbellamy. Gunna be an amazing shoot can’t wait to learn all I can! Full press release in bio.'

Rufus made his professional acting debut in Sue Townsend’s The Secret Diary of Adrian Mole 13 & 3/4s: The Musical, while he's also acted in a handful of West End productions.

The time period will likely cover William attending University of St Andrew's in Scotland where he met Kate as well as Prince Charles' wedding to Camilla Parker-Bowles and the aftermath of the death of Princess Diana.

The dates also cover the Queen's Golden Jubilee celebration as well as the royal family's reaction to wider world events including the 9/11 terrorist attacks.

Other key events in the time period including Edward's marriage to Sophie Wessex in 1999 and the deaths of Princess Margaret and the Queen mother in 2002.