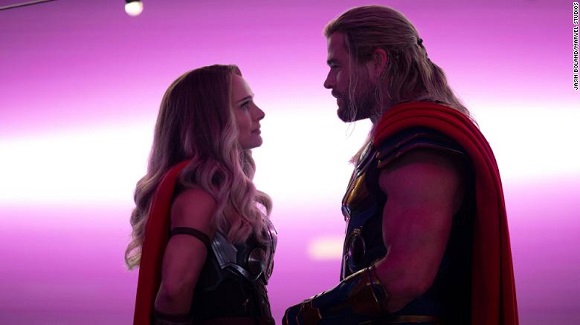 Chris Hemsworth is every bit as super offscreen as the Marvel hero he plays, according to his fellow actors -- even ditching his daily dose of meat before shooting a scene in which he kissed his vegan costar in "Thor: Love and Thunder," Natalie Portman.

The actress, who reprised her role as Jane Foster in the new "Thor" film, and costar Tessa Thompson discussed Hemsworth's kindness during a recent appearance on the UK radio series "Capital Breakfast with Roman Kemp."

The hosts grilled the two guests on whether Hemsworth had any hidden flaws behind the muscle and charm, but Portman and Thompson had nothing but pleasant things to say about the Marvel mainstay.

"The day we had a kiss scene, he didn't eat meat that morning because I'm vegan," Portman said of Hemsworth. "He eats meat like every half hour ... he was just being thoughtful."

Hemsworth may not actually consume a full meal of meat every half hour, but he does eat 10 meals a day, around 4,500 calories, to maintain the God of Thunder's bulking figure, trainer Luke Zocchi said in a video of Hemsworth's intense training regimen.

Portman, meanwhile, has adhered to a vegan or vegetarian diet for most of her life, she's told multiple publications over the years. While she didn't insist that Hemsworth stop eating meat before their onscreen kiss, she said, it was a considerate gesture.

Thompson agreed with Portman that Hemsworth is overall a lovely coworker, even when he's experiencing a bout of hunger-fueled irritation.

"He does get grumpy and he does get 'hangry,' but he's still sweet," Thompson told the hosts of "Capital Breakfast."