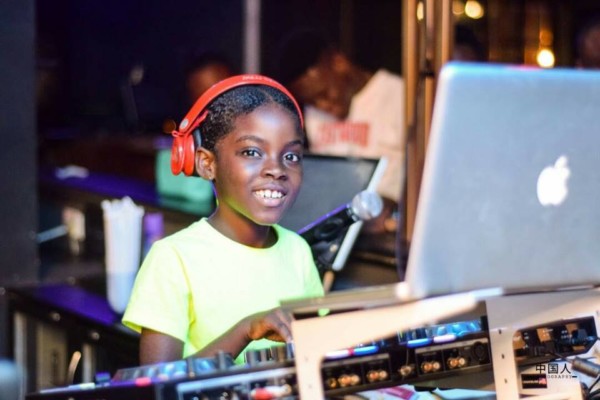 In a post PrimeNewsGhana chanced on their official social media page, DJ Switch was been celebrated and honored on which yielded the entire nation and her fans in extreme amusement.

After showcasing her talent to the world and hanging with the likes of President of France, Emmanuel Jean-Michel Frédéric Macron, Bill and Melinda Gates at the 2018 Goalkeepers in New York, it is no surprise the talented DJ has caught the attention of the international record label.

Today we honor DJ Erica Tandoh (@DJSwitchGhana), a 10-year-old DJ who is the youngest recipient ever to win the Ghana DJ Awards. Her passion for DJing is inspiring; she's known for getting people on their feet dancing and putting everyone in a good mood. "I picked the name DJ Switch because I switch up people's happiness" - Erica Tandoh #BlackHistoryMonth

Today we honor DJ Erica Tandoh, @djswitchghana, a 10 yr old who is the youngest recipient to win the Ghana DJ Awards. She gets everyone on their feet dancing & in a good mood. “I picked the name DJ Switch because I switch up people's happiness" - Erica Tandoh #BlackHistoryMonh pic.twitter.com/D19PPELDq7

DJ switch rose to fame after she successfully emerged the winner at the 2017 edition of TV3’s talented kids and since then, the identity and brand of the 11-year old girl has crossed beyond the shores of Ghana drawing massive impressions and triumphs with her heavenly creativity in disc jockeying.

She was recently listed as the DJ Entertainer Goalkeeper by the Gates Foundation owned by the world’s second richest man Bill Gates and wife, DJ Switch joined renowned personalities including French President Emmanuel Macron, Melinda Gates, Ed Sheeran, Fatoumata Diawara, Nancy Kacungira, The Brooklyn Youth Chorus and a host of other carefully selected speakers from around the world to share their stories of challenges, innovation, and leadership.