Kevin Hart steps down from hosting Oscars to avoid 'distraction,' apologizes to the LGBTQ community 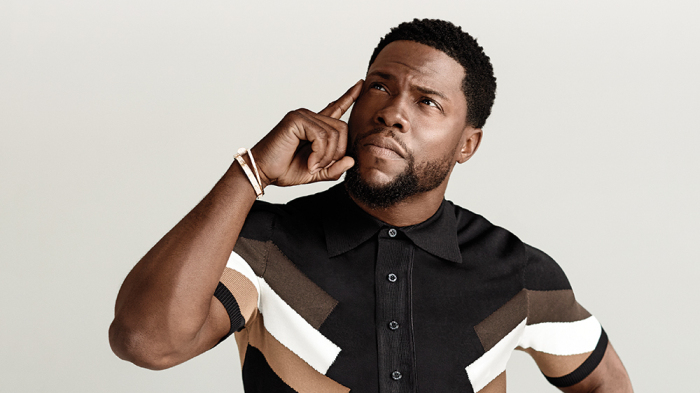 Kevin Hart steps down from hosting Oscars to avoid 'distraction,' apologizes to the LGBTQ community

Kevin Hart is stepping down from hosting the Oscars amid controversy concerning years-old tweets in which he made homophobic and transphobic comments.


“I have made the choice to step down from hosting this year’s Oscars….this is because I do not want to be a distraction on a night that should be celebrated by so many amazing talented artists,” he wrote on Twitter Thursday night. “I sincerely apologize to the LGBTQ community for my insensitive words from my past.”

In a follow-up tweet, he added, “I’m sorry that I hurt people.. I am evolving and want to continue to do so. My goal is to bring people together not tear us apart. Much love & appreciation to the Academy. I hope we can meet again.”

Representatives for the Academy, which organizes the Oscars, did not immediately respond to EW’s request for comment on Hart’s decision to step down.

Earlier in the day, Hart said that he would not apologize for comments, despite being given an ultimatum by the Academy of Motion Picture Arts and Sciences.

“I just got a call from the Academy and that call basically said, ‘Kevin, apologize for your tweets of old or we’re going to have to move on to find another host,’ talking about the tweets from 2009, 2010,” Hart said in a video posted to Instagram. “I chose to pass, I passed on the apology. The reason why I’ve passed is that I’ve addressed it several times.”

He signed off by saying, “Regardless, the Academy, I’m thankful and appreciative of the opportunity. If it goes away, no harm, no foul.”

The video marked the second dispatch posted by Hart on Thursday addressing his controversial tweets. Earlier in the day, he said that he is in a “great, mature place” now and asked people not to judge him by his past. 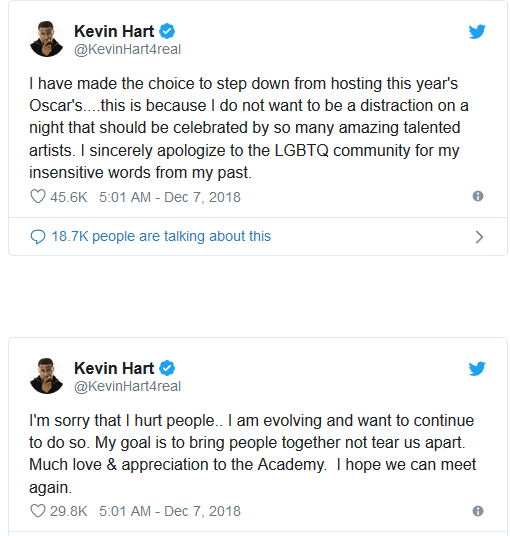 “My team calls me, ‘Oh my God, Kevin, the world is upset about tweets you did years ago,” Hart said in a black-and-white video posted to Instagram. “Guys, I’m almost 40 years old. If you don’t believe people change, grow as they get older, I don’t know what to tell you. If you want to hold people in a position where they always have to justify their past, then do you. I’m the wrong guy, man. I’m in a great place, a great mature place, where all I do is spread positivity.”

After Hart was announced as the host of the upcoming 91st Academy Awards on Tuesday, people began revisiting the comedian’s Twitter account and bringing up posts from as far back as 2009, in which Hart made homophobic and transphobic comments. In one tweet from 2011 that Guardian journalist Benjamin Lee tweeted out after the Oscars host announcement, Hart had written, “Yo if my son comes home and try’s 2 play with my daughters doll house I’m going 2 break it over his head & say n my voice ‘stop that’s gay.’”