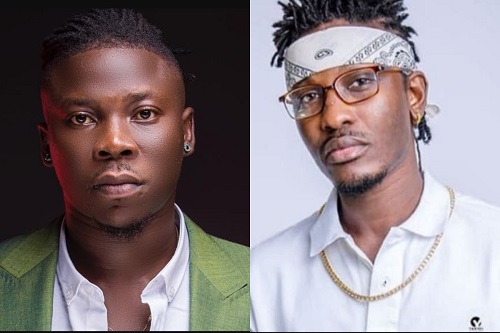 According to the 'Sobolo' hitmaker, Tinny’s position that he should have reached out before paying off the ¢2,000 is flawed.

“Big respect to Tinny but his reason during the interview at the time that I didn’t call him before or after, is flawed. It doesn’t warrant for you to squeeze me in such a manner, insult my intelligence,” he said on Hitz FM.

The GHC2000 brouhaha follows an accusation by an event promoter alleging that Tinny refused to refund the amount he paid him for a show at Worawora Afariwa Loungeon, which he failed to show up.

Stonebwoy upon bumping into the issue being discussed on air decided to pay the money to end the discussion.

But, Tinny, breaking his silence in an interview on Okay FM said he is not impressed with the entire “clout chasing”.

Tinny described the claims by the event promoter and Stonebwoy’s willingness to pay as an act of foolery since no one reached out to him to verify the claims. He indicated that he saw Stonebwoy’s kindness as a façade.

“I saw a video of Mercury Quaye, another gentleman, and Stonebwoy entered the studio, and they said I owe whatever and then he (Stonebwoy) says he’ll pay.

“I realised that that room was full of fools. There wasn’t a wise person in there. I am telling you straight, I am on the radio, yes. I saw them as just a bunch of fools. A bunch of idiots, who have been given a chance to be on the radio.

However, Stonebwoy says he will not allow such incidents to prevent him from doing good as everyone will need help in this world.

"Still i will do the most i can for whoever i can. Everyone needs help in this world." He added

He, therefore, says he will never have any issue with Tinny as he still respects him as a senior in the industry.