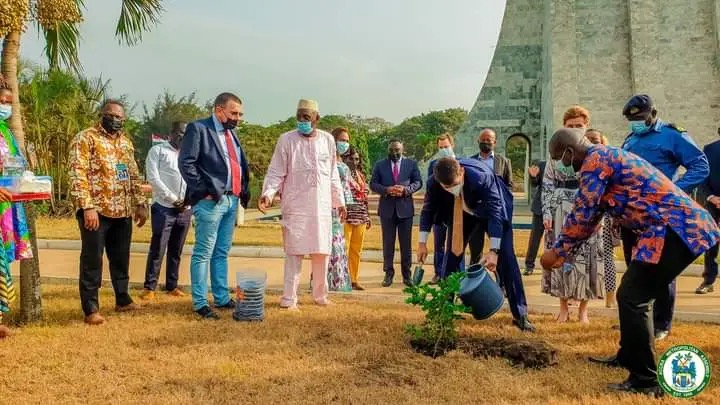 Hungarian President Janos Ader was in Ghana for a three-day working visit. He was accompanied by his wife and other senior members of his administration. Together with his delegation, they visited the Kwame Nkrumah Mausoleum, where the remains of the late Ghanaian leader and that of his wife Fathia, are interred. The mausoleum also houses the works and framed photographs of the working life of Dr Nkrumah, including meetings with other world leaders.

Ghana and Hungary have had and continue to have a strong relationship which started under Dr Nkrumah. The visit to his resting place was therefore appropriate. Pictures of the visit had since been made public and, sadly, I was scandalised by how the grass at the place has been allowed to wither into a distasteful brown grass. It is very depressing, to say the least. This is the African Man of the Millennium we are talking about; a man who was deliberate and intentional about his decisions during his lifetime to now see his final resting place in that state, shows we are not ready to make the most out of out such important historical monuments.

As someone who has in the past taken visitors to the mausoleum, greening the place adds value to the existing aesthetics and increases the value. Those who have had the opportunity of visiting the homes of former world leaders which have now been converted into museums will attest to the conditions under which those places are managed. Anyone who has visited the home of Nelson Mandela can attest to what I am putting across. Obviously, we cannot say the same about the mausoleum of Dr Nkrumah.

I have seen videos of visitors to the mausoleum eulogizing the great works of Nkrumah but then raising concerns about the unappealing manner the surroundings are kept.
I don’t know how much goes into keeping the place and how much money comes in by way of revenue, but I don’t think keeping the grass green should cost an arm and a leg.

Most readers will recall the Cadillac saloon car he used as his official vehicle which has been left to rot. The Cadillac is an important part of Dr. Nkrumah’s legacy and posterity will never be kind to this country if it is allowed to rot and has to be discarded. Sometimes you wonder how an important part of our history will be left in the hands of the unkind weather.
We cannot be seen waxing lyrical about Dr. Nkrumah when selling our tourism options to a global audience in London, Washington, Paris or Pretoria, but fail to commit to preserving the remains of the material things left behind for generations.

The situation with the Kwame Nkrumah Mausoleum reflects our narrow or skewed mindset when it comes what constitute tourism, beyond foreign guests lounging at nightclubs or dining at high profile restaurants. It is not surprising that we have reduced most of our tourism potentials to guests lodging in hotels; smoking cigars, dripping in champagne and associated appetizers. And for those who want to do something different, we just put them together in a hotel lobby, invite drummers to come and play for few hours and call it a night. We don’t even show respect and decency to the drummers, especially one that I saw in one of Accra’s popular hotels.

The importance of tourism to a country’s economy cannot be over-emphasized. Apart from the usual areas that government is hopeful of raking in the needed revenue for development, the tourism sector is one area that has been added to the equation. But revenue from the sector won’t fall from the sky; those responsible for the sector especially the Ministry of Tourism, must have a thought through blueprint covering historical figures, their homes, communities, famous marketplaces and more.

According to a 2021 UN Conference on Trade and Development report, the impact of COVID-19 on tourism means more than $ 4 trillion has been lost to the global economy. About the report, the UN Secretary General Antonio Guterres said, tourism “touches almost every part of our economies and societies.”
He advised countries to therefore have a rethink about how they see tourism, because more and more people are being economically marginalized in the existing economic structure, but tourism can provide the needed space for a marginalised group to have an opportunity within the income structure.

It is not out of nothing that the famous Kalakutu Republic, the communal compound where Fela Anikulapo Kuti once lived with his more than twenty wives, is now a mecca of a sort. The republic continues to receive visitors from around the world who embark on a pilgrimage to interact with Fela’s body of works and life story.

The famous Felabration, an annual music festival which has since gone global, when it first started in 1998, has been added to the mix. The festival is now observed around the world. Imagine the number of tourists who visit the SHRINE and what financial impacts that brings to the local economy, in Lagos.

Why can’t we for example package the story of a personality like Nii Kwabena Bonnie II, a prominent Gold Coast Chief in Osu Alata in Accra, who led a boycott of European goods, a boycott which inspired the drive for independence?