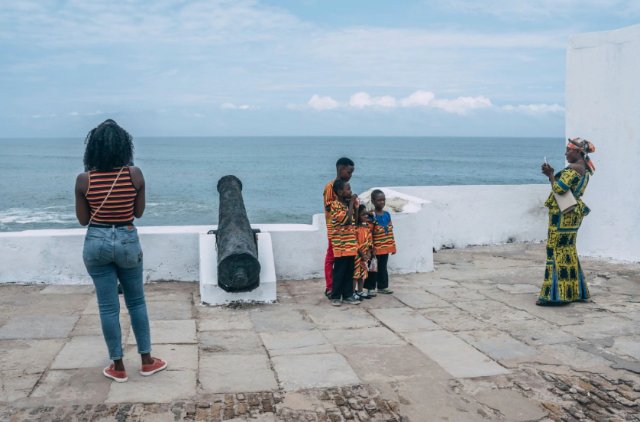 Tourists pose for pictures at the Cape Coast Castle in Ghana on Aug. 18, 2019
Shares

Much has been made in the United States about the 400th anniversary of enslaved African people arriving in Jamestown, Va.

On the other side of the Atlantic, the Ghanaian Tourism Authority also marked the anniversary — by inviting Americans to take a vacation.

The West African nation launched a major marketing campaign, called the “Year of Return,” to boost tourist numbers. Targeting the descendants of those captured from Africa’s shores, Ghana planned a bevy of entertainment activities for visitors — including a paragliding festival and AfroChella, a music and culture festival. Over 1 million foreigners visited the nation by the end of 2019, surpassing the organizers’ goal by 25 percent.

READ ALSO: Your welcoming attitudes attracted many to our country - Prez Akufo-Addo commends Ghanaians on success of 'Year of Return'

While only about 10 percent of enslaved Africans who arrived in the Americas departed from Ghana, no other West African nation has been able to capitalize on tourism related to the memory of the trans-Atlantic slave trade like it has.

This stems from far more recent events, including the efforts of Freddye Henderson, an Atlanta-based fashion designer and Spelman College professor, who deserves credit as the architect of African American travel to Ghana. Her commitment to transforming African Americans’ problematic ideas about Africa developed the tourist infrastructure that made Ghana’s 2019 Year of Return possible.

When Ghana overthrew British colonial rule in 1957, the new government, under the leadership of the U.S.-educated Kwame Nkrumah, invited black American political leaders to celebrate the historic moment. Among the invitees were Henderson’s close friends Martin Luther King Jr. and Coretta Scott King, who asked her to help them plan their first trip to the African continent. Henderson planned their travel but also joined the delegation, changing not only the trajectory of her life but of African American-Ghanaian relations.

Born Freddye Scarborough in Franklinton, La., in 1917, Henderson’s journey to becoming a travel entrepreneur was an unlikely one. At the end of World War II, she opened a custom dress boutique in Atlanta and became the first African American woman to earn a master of science degree in fashion merchandising at New York University in 1950. This training led to a successful career as a professor of costume design at Spelman College.

In 1954, as president of the National Association of Fashion and Accessory Designers, the leading organization for black women in the industry, Henderson joined a NAFAD delegation to Europe to partake in the fashion and international trade shows. Henderson returned impressed with the ease of travel, the grandeur of the continent’s cultural destinations and the lack of overt racial discrimination the delegation encountered abroad. She told her husband, Jacob, “I think more black people would travel if they knew how easy it was.” They used their personal savings to open the Henderson Travel Agency in 1955.

While the Hendersons had planned many trips to Europe by 1957, West Africa was virtually unknown to them and to the travel industry as a whole. No U.S.-based airlines had direct flights to the region, and the few travel agencies that booked African itineraries catered to white American and European travelers headed to see the game reserves in the east. When the Hendersons visited Ghana a few months ahead of the independence celebration at the end of 1956, they found that the soon-to-be-independent nation’s tourist infrastructure was extremely limited and that much of what was emerging was still in the hands of the British.

This presented Henderson with an entrepreneurial opportunity. She moved to develop partnerships with black Ghanaians, helping local taxi drivers buy buses to shuttle members of the African American delegation across the country and working with Ghanaian female entrepreneurs and artisans to design garments and accessories that her travelers would want to buy.

The relationships she built on that scouting trip and the success of the African American delegation’s trip to Ghana convinced Henderson that the nation would be a desirable destination for African American travelers long after the independence celebrations ended — especially those committed to overthrowing American racism. Henderson presented Ghana as an appealing tourist site because of its triumph over white rule and oppression. This portrayal resonated deeply as black Americans engaged in their own battles for full citizenship.

Henderson mounted a campaign in the black press to convince African Americans that they needed to dispel long-held stereotypes about African primitiveness and see Ghana for themselves. Her marketing materials depicted Ghana as a nation in a “dynamic state of ascendancy.” Highlighting Ghanaian independence as the vanguard of the black freedom struggle and the capital, Accra, as a thriving metropolis, she developed elaborate itineraries that brought black Americans together with Ghanaian nationals and expats to dance under the stars to Highlife and debate strategies for global black freedom.

Even after Nkrumah was overthrown in a coup in 1966 and his vision for a unified African diaspora no longer seemed attainable, Henderson remained undaunted in her quest to bring African American tourists to Ghana. In fact, a partnership with Pan Am in the 1970s gave her a chance to reimagine the airline’s marketing materials. Reflecting Henderson’s vision, it touted “a delightfully different tour of Africa featuring the excitement of a people building new nations … friendship, people and progress.”

Henderson’s progressive vision of what modern West Africa had to offer African Americans, however, got eclipsed in the late 1970s, thanks largely to African Americans’ newfound desire to explore their past. According to scholar Salamishah Tillet, political instability in the region, the lack of commemorative sites dedicated to slavery in the United States and the popularity of “Roots,” Alex Haley’s book and the adapted miniseries, turned Ghana from a nation with lessons about the future for African Americans into one that helped them understand their past. Ghanaian tourism became synonymous with the slave trade and the fraught quest for a sense of home for the children of the African diaspora.

In 1999, Henderson returned to Ghana one last time. It was a festive occasion replete with African drummers and dancers that must have reminded her of the celebrations that first brought her to the nation in 1957. During a lavish five-hour ceremony, more than 8,000 people watched as Henderson was draped with kente cloth, enstooled as an honorary Ashanti and given the name Nana Akwantu Hemaa, which means the Queen Mother of Travel and Tours, by the Ghanaian Ministry of Tourism, Arts and Culture for her work pioneering travel to the nation and for sending tens of thousands of travelers to its shores. As civil rights activist and congressman John Lewis recalled after her death in 2007, “If you wanted to travel especially to Africa … the Freddye Henderson travel agency was the way to go.”

As much as Henderson would’ve loved seeing over a million people “return” to Ghana and find themselves dancing to Afrobeats, eating jollof rice and posing for the perfect shot at Elmina Castle in 2019, the Year of Return celebrations were a far cry from the political context of decolonization that first brought her to the new nation. While the Ghanaian Tourism Authority is applauding its successful campaign, Ghanaians and African Americans must learn the lessons Henderson tried to teach concerning not only their linked past but their shared destinies.