Libya is Obama’s ‘shithole’ and it is an unforgivable blunder 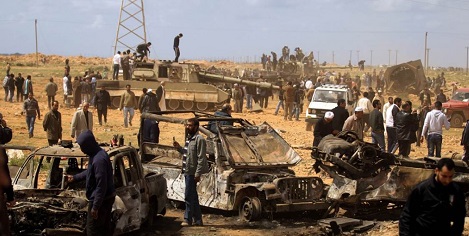 Libya is Obama’s ‘shithole: Positioned comfortably at the top of the seven cardinal sins against the continent of Africa is the term ‘shithole.’

Allegedly coined by President Trump to describe the deplorable conditions around the continent, the sons of the soil have vowed never to forgive the self-styled president—as if he will ever lose sleep over it!

Seven years earlier, the President described as “the noblest man who has ever lived in the White House,” joined his NATO allies to wage war on the most prosperous nation in Africa.

“President Obama is not just any other American president," Kenyan Deputy President William Ruto then declared. "He has African roots, and more specifically Kenyan roots.”

Michelle Obama’s memoirs on track to be most successful ever

Check Out: How the Obamas are flying fast into the billion dollar circle

It is also no secret that many around the world today celebrate appearances over substance and sadly, the vaster the audience, the more vulnerable the people watching the media.

And as we know, the media did not disappoint as it buoyed him up. They drooled over his chiseled pectorals, silver tongue and charisma. My African brothers completely awestricken by Washington’s hero could only sit back and revel in the glory. “The black man too is the President of United States,” many boasted, and that has been their curse ever since.

So when President Obama described the invasion of Libya as his “worst mistake” —it was well received as enough punishment for the son of the soil.

Obama’s African descent absolved him of any wrongdoing and it was enough to pacify the over a million African gods for all his sins. The actual shithole he created didn’t really matter!

Libya had no external debt with its foreign reserves amounting to over $150 billion before the invasion. Global Research report March 2016 stated: “In a bitter irony, after having stolen Libya’s oil wealth and confiscated its overseas financial assets, the “donor community” has pledged to lend the (stolen) money back to finance Libya’s post-war “reconstruction”.

The stark reality of the monster Obama created in the land of his forefathers would linger for many years. Today, Libya is in flames but it is the whole continent that burns. The Mediterranean has become a death trap for millions fleeing their home, a place once considered an oasis. Libya is Obama’s shithole! But, where is lies the outrage? Such hypocrisy!

The verdict, as unsettling as it may seem sums up the depraved world in which we live today; when ‘the noblest’ believes that regret is enough remedy for destabilizing an entire region, but proposes the ‘electric chair’ for others who do not mince words in describing the conditions he helped unleash.