MANASSEH’S FOLDER: A critique of Akufo-Addo’s “Thank You” tour 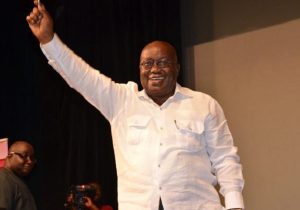 When the much-vilified old Man showed up again for the third time, his fate on the chopping board of the sharp-teethed babies and ill-bred adults was more predictable than the electoral results of Bantama or Ketu South. They said he was too old to contest. He contested.

They said he was too sick to campaign but he campaigned. When the young men lost their voices speaking softly, he screamed but still did not cough. They said he was so sick that after campaigning for one week, he would be flown out secretly to Great Britain or elsewhere in Europe for medical treatment. But he endured the rugged roads while others flew in helicopters.

After enduring the hard terrain and being declared the President-elect of the Republic of Ghana, we expected our Old Man to do one of three things: rest his aching bones, fly to Europe for medical care or sit down to supervise the transition. He did not do any of these. It appeared the election results made the Old Man younger, and the young man older.

So with the energy of a teenager, he hopped into his campaign vehicles and started crisscrossing the country in the same way his main opponent did in the last days of the campaign. From the dusty roads of the savannah regions to the swampy lands of the Western Region, he moved from region to region, town to town, palace to palace. He met with business leaders and paid courtesy calls on traditional leaders. Was he appealing for their votes? No. At least, not now!

He was on a “Thank You” tour of the nation. It is important in our culture to express gratitude. A little over four years ago, his main opponent did a “Thank You” tour in a funeral cloth. That was after the demise of his predecessor. And it really paid off when he appeared on the ballot paper. So the Old Man, knowing that he or his lieutenant, would go back to these people in four years to ask for their mandate, he had to go and thank them.

He is not the first person to go thanking people. But he did it differently. He should have waited until he is sworn in. Then he would have the state resources and apparatus to himself. Then after some months or at the ending of his first year, when he has settled, he will tour the country. But he decided to go.

The good thing about this early “Thank You” tour is that our paltry resources will not be wasted on the tours. Such tours are often enough reasons for the regional ministers, district and metropolitan chief executives to cook up huge budgets to cover the visit of the Head of State. And human resources will be wasted.

The second advantage in this pre-inauguration “Thank You” tour is that it will give the Old Man time to sit down and work. In Ghana, each President is given four years, but they often spend two years working for the country. They spend the first year receiving chiefs, business leaders, clergymen and other identifiable groups which line up to pay unending courtesy calls on the President. In the last year, the president hits the road to campaign for re-election. So they often do two years.

But the President-elect has met individual chiefs and regional houses of chiefs already. He has met the TUC. He has met the Catholic Bishops Conference. He has met the Private Enterprises Foundation. By the time he is sworn in on January 2017, the Old Man will have met all those he is expected to meet. He will then have the time to sit down and deliver.

For the reasons above, I think the Old Man has started well. He has done a wise thing. We hope he continues well and ends well. Ghanaians seem to be very expectant of him. The goodwill for him and his younger brother seem to be very high. They cannot disappoint.

We know the purse is dry. But we cannot take excuses. The chiefs and traditional rulers should stay away from the Flagstaff House. Only Nii Ayi Bonte may be given the opportunity to go and explain why he should be taken seriously. But the Old Man should not entertain people at the expense of his core mandate. Four years may appear a very long time, but it is shorter than a deep breath.

In four years, we shall not judge our Old Man by the number of visitors he received. We won’t remember the number of courtesy calls he paid. We will not count the number of funerals he joined us to mourn.

And the boy from Bongo will want to know whether the Old Man is a man of dignity and integrity as they claim, whether he is a man who will make anti-corruption journalism a delight by punishing government officials who will be caught stealing from the state; or whether he will dash the expectations of the few Ghanaians who still have some modicum of hope in the politician and force them to sigh with despair that “all politicians are the same”.

Nana Addo Dankwa Akufo-Addo’s victory in the 2016 elections brought a psychological healing to the millions of Ghanaians across the country whose conscience, intelligence and dignity were insulted and assaulted by the endless slideshow of scandals and the daily display of impunity and arrogance of power.

We watch with baited breath. We wait with optimistic patience. And wonder with cautious hope whether the man who has spent the past four decades of his life in frontline politics will want to leave indelible footprints in the sands of time, or whether he will just add his name to the roll of people who occupied the leadership space without any meaningful impact.

May God be his helper! And may Ghana be the ultimate beneficiary.