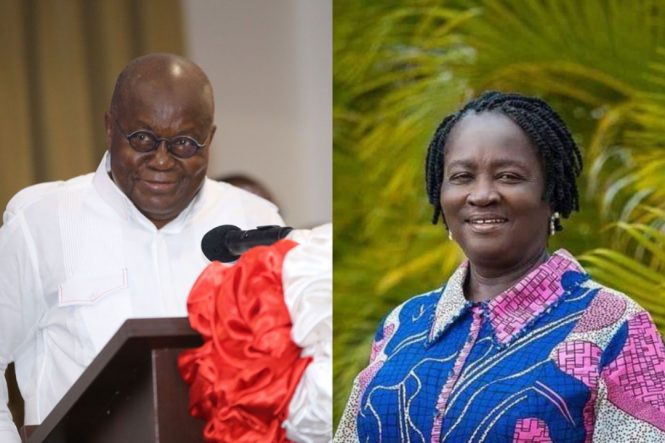 The flag bearer of the opposition National Democratic Congress (NDC) has finally named his running mate for the 2020 election. Contrary to some leading names that had been widely circulated since last year, John Dramani Mahama settled on a woman.

She is a former minister of education, a university professor and former Vice-Chancellor of the University of Cape Coast. Her name is Professor Naana Jane Opoku-Agyemang.

Itâ€™s the first time a winnable political party has selected a woman as a running mate. Itâ€™s an opportunity to have a first a female vice president in a country where some people are still not comfortable taking instructions from women.

As expected, the scathing scrutiny has started, with some escalating it beyond the boundaries of sanity and decency. But let us stay with the printable ones. What are they saying?

She cannot match Dr. Mahamudu Bawumia of the New Patriotic Party (NPP). She brings nothing to the ticket. Ghanaians, especially women, will not vote for a woman. She signed the petition to release the Montie 3, the three young men imprisoned by the Supreme Court in 2016 for criminal contempt. Her record as a minister of education is poor. The list goes on and on.

Politically, it may be true that her choice doesnâ€™t bring much to the Mahama ticket because she doesnâ€™t appear to have an identifiable constituency. Sheâ€™s a woman, but she should be accepted based on the strength of her character and accomplishments, not because she is a woman.

In terms of governance, it would be difficult to say how she can serve as a check on John Mahama should they win. John Mahamaâ€™s first term was not impressive and one would have expected a stronger figure that could serve as a check on him should he win, but that is not likely to come from his former appointee.

But has a strong figure really counted in the output who occupies the second most important office of the land? Historically, vice presidents of this country would have their say, but the president and his inner circles often have their way.

It is also true that many looked to a choice that would provide an antidote to Dr. Bawumia. The NDC would not agree publicly, but inwardly they will admit that Dr. Bawumia was instrumental in the NDCâ€™s defeat in 2016. They will admit that he and his wife, Samira, were the most exciting pair of tongues on any campaign platform in 2016.

Since Dr. Bwumia burst into the political landscape like an unexpected spring of water in a desert, the subject that has dominated our political discourse has been the economy. Mention Bawumia and one is tempted to think about the economy. His agenda-setting role in making the economy the front burner of national and political discourse cannot be ignored, even if you have reason to question the sincerity and the ability of his government to implement the economic sermons he preaches.

In my book The Fourth John: Reign, Rejection & Rebound, there is a chapter titled The Bawumia Factor in the 2016 election in which I wrote:

â€œWhen the campaign took off, Dr. Bawumia was like a dribbling striker in the midst of a disorganised defence, too slippery to contain. In the political game of 2016, he was the supporting striker to his flag bearer. At a point, however, he appeared as though he was the main striker, attracting the attention of the defenders, leaving the main striker to enjoy a kind of freedom that was unusual with presidential candidates.

â€œThe arsenals of the NDC in 2016 were directed at Dr. Bawumia and the prevailing economic conditions made him believable even when he did political propaganda with the economy. In bad times, even the lies of the opposition sound more credible than the truth of the governmentâ€¦â€

For this reason, many, including some members of the NDC, expected an economist with a witty tongue as sharp as a circumcision blade to match Dr. Bawumia.

But Dr. Bawumia has not always been like this. In my book, I indicated that when he was first appointed as running mate in 2008, â€œhe did not appear to have what it took to convince a class of primary school kids to vote for his party.â€

Some political opponents of the NDCâ€™s running mate also argue that the position of a vice president is key because, in the absence of the president, the vice president acts as the president of the country. The Majority Leader of Parliament, Osei Kyei Mensah-Bonsu, has stated this publicly, questioning the ability of Prof. Jane Naana Opoku-Agyemang to take over should anything happen to the president in the course of the four years. This brings us to the next important question.

Can Professor Naana Jane Opoku-Agyemang be president of Ghana?

Ghana and the rest of Africa are not this miserable because we have lacked people with ideas to turn our situations around. We have not grown to that stage where our problems are complex and need complex manoeuvrings to outdo other nations to remain dominant. Ours are not the problems that face superpowers or trillion-dollar economies. We are still faced with the most basic problems of our livesâ€“water, electricity, healthcare, decent schools, deplorable roads and lack of hospitals among other necessities of life.

The solutions to our problems are in our textbooks right from the primary schools to the universities. Our economic problems and their solutions are available in university dissertations and policy documents from the World Bank to the IMF. They are even written better by nationâ€™s that were once like us, but which now lend to us.

Our political parties remind us of the solutions when they are in opposition. So it isnâ€™t for the lack of knowledge that we are perishing.

Dr. Bawumia has been championing the digitisation of our economy and pushing for us to move into a cashless regime. At the same time, his government is printing bigger denominations of our currency that will make it easier to carry huge amounts of cash and move around easily.

This has happened not because Dr. Bawumia, the President, the Finance Minister and members of the economic management team are dumb to the fact that the bigger denominations will defeat the cashless economy campaign. There are factors that cloud common sense and throw good judgment out through the window when knowledgeable men and women sit in the boardroom.

So we donâ€™t lack the ideas. What we lack is honest and principled leadership. What we need are people who will put the nation ahead of their greed and prevail on their appointees to do same. What we have had are men and women who donâ€™t even attempt to impersonate a fraction of the virtues they advertise when they are in the wilderness of opposition.

It drills down to values, principles, conscience and character. If a leader has these, he or she could assemble the right people and experts to help run the nation. A president does not necessarily have to be an expert. Our elders say it is the wisdom of others that prevents the king from being called a fool.

I agree with those who are faulting Professor Naana Jane Opoku-Agyemang for signing the Montie 3 Petition. It contradicts the case people are making for the fact that sheâ€™s a woman. What the Montie 3 said about the female Chief Justice at the time was unfortunate, and the first female vice-chancellor of a public university in Ghana shouldnâ€™t have gone near that petition. Even the Presidentâ€™s lawyer advised against freeing the recalcitrant three.

But if Akufo-Addo is president and still wants to be president, why should we subject Jane Naana Opoku-Agyemang to different standards?

And what have we seen when we gave him the highest office of the land? Was he not president when the nation witnessed brazen acts of vandalism by vigilante groups from his party as soon as he was sworn into office?

Did Akufo-Addo cease to be a believer in the rule of law when a Commission of Enquiry he set up recommended sanctions against perpetrators of the Ayawaso West Wuogon violence and he refused to act? Where were these credentials when even after â€œdisbandingâ€ groups, the Kandahar Boys in Tamale still went and seized about 400 tricycles belonging to the Northern Development Authority and no one was arrested even though evidence abounds, of who took them and where they were kept?

Ask any journalist or civil society activist how safe they are speaking up against the government, and youâ€™re likely to be reminded that they were safe until an undercover journalist was threatened by a leading member of Akufo-Addoâ€™s party. He put his picture on television, told his viewers where the journalists lived and instructed that he should be attacked and he would take responsibility. The journalist was murdered by unknown assailants and nothing has come out of it. Nobody has been held responsible.

They would tell you they were safe until the National Security operatives invaded a media house, arrested journalists and seized their laptops, phones and other gadgets. They were detained for days and allegedly tortured, but no evidence of wrongdoing was ever established against them.

So if Akufo-Addo has the chance to lead Ghana again, why are his followers saying Prof. Naana Jane Opoku-Agyemang cannot be a running mate? After all, her position is lower than that of the president, so why should we subject her to higher standards?

In their lives outside politics, Nana Akufo-Addo managed a small law firm in Adabraka, with a few tens of lawyers. Professor Jane Naana Opoku Agyemang managed a big public university with thousands of employees and tens of thousands of students. If Akufo-Addo can be trusted to manage our nation, why canâ€™t the professor do the same?

Have we not amply demonstrated that we do not care about the character and actions of our leaders? How has Akufo-Addoâ€™s background as a human right and rule of law advocate influenced his presidency that Professor Opoku-Agyemangâ€™s background cannot?

The good thing about Prof. Jane Naana Opoku-Agyemang is that since her name came up, no one has talked about corruption even though, as a Vice-Chancellor and minister of state, she was in a position to make big procurement decisions.

If she doesnâ€™t bring much to the ticket, she definitely takes nothing away from it, the way a scandal-ridden candidate would have done.

But it takes more than that to lead a nation. A leader should be the custodian of our values, principles, morality and good conscience. This is what we have lacked in a long time and that scrutiny or expectation should not be limited to the NDC running mate.

Or is it because sheâ€™s a woman? Iâ€™m not very old but Iâ€™ve read and listened enough to know that wielding a manhood, no matter how potent it is, is not a determinant of good leadership.

We can decide to either keep the bar for presidential aspirants high for all or lower it for all, irrespective of oneâ€™s gender, ethnicity, profession or status.