MANASSEH'S FOLDER: Even Akufo-Addo's wife will choose John Mahama over her husband on this 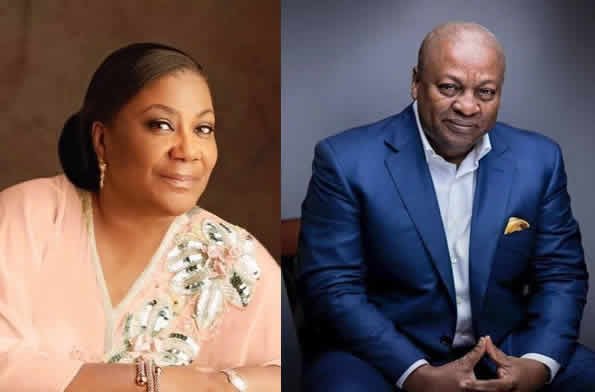 Some NPP activists say my comments on the Akufo-Addo government are baseless. They are not! In November 2016, I wrote an article in which I said any idiot could use our money to build infrastructure and boast about that.

I did not see what Mahama had done as exceptional. In the same way, any idiot can use our money to pay school fees for SHS students. One does not need to be a genius to do that. The opportunity cost of John Mahama's infrastructure could have been the payment of fees.

It's just a matter of priority. My argument was, and still is, that there's more to leadership than using the tax payer's money to do things and boast. The main problem with our country and continent is wastage resulting from greed and corruption.
And that's why I was hopeful that an "incorruptible" and "no-nonsense" Akufo-Addo was the Messiah Ghanaians needed in the post-Mahama era to restore hope and decency into our national life. That's why after two and a half years into Akufo-Addo's presidency, I hold the view that we bought nicely packaged key soap at Circle, thinking it was a smartphone.

There's a lot to say, but let me give you just one simple example, which I think after reading, you will be left with no doubt that even Nana Akufo-Addo's wife would choose Mr. John Mahama over her husband in how the two have dealt with the same scandal.

In 2013, I investigated the GYEEDA Corruption Scandal. The government and the private sector were stealing our money through fraudulent contracts. For four years, the NPP used my GYEEDA investigation as a basis to call John Mahama corrupt. John Mahama took some actions, but they were not enough.

In March 2016, when Nana Akufo-Addo presented his version of the State of the Nation Address, this was what he said of Mahama's action on GYEEDA and other scandals: “It is clear from the actions taken on cases like judgment debts, the World Cup saga, GYEEDA, SADA, the DVLA saga, the Metro Mass branding, etc. that the fight against corruption is a sham. I say again, the so-called fight against corruption is a sham.”

Here is what John Mahama did on the GYEEDA Scandal:

1. He caused a committee to be set up to probe further.

2. John Mahama canceled all the GYEEDA contracts, except the Zoomlion Contract. The contracts were fraudulent in nature, and the Zoomlion contract was the worst.

6. Roland Agambire's rLG and other companies collapsed because of the actions taken by John Mahama's government.

7. GYEEDA saw some reforms after the passage of the GYEEDA Bill into law.

8. Mahama did not award any of the companies a contract in GYEEDA.

Did I agree with Akufo-Addo that Mahama's handling of GYEEDA was a sham? Yes. The big culprits were left off the hook. Abuga Pele and Philip Assibit were scapegoats, the fingerlings in the scandal.

There were hundreds of millions of cedis that were not retrieved from Zoomlion, Better Ghana, and rLG. Mahama still kept the Zoomlion contract. This contract allowed the government to pay 500 cedis to Zoomlion per sweeper a month, but Zoomlion paid the sweepers 100 cedis and kept the rest as management fees.

Zoomlion claimed there were 45,000 sweepers so every month, Zoomlion was paid 18 million cedis as management fees. This contract expired in February 2013, and between 2013 and 2019, there is no written agreement between Zoomlion and the government but we pay 270 million cedis to Zoomlion a year.