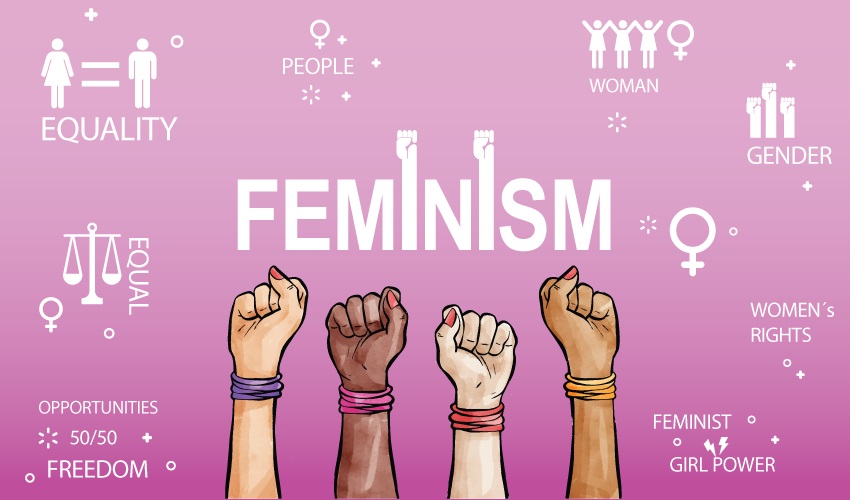 Ever heard of Feminism or feminist?Â  If you have, then these words may either stir up resentment, insouciance or leave you so buoyed up.Â  What is feminism and why the fervid rejection or championship?Â  How do myths surrounding feminism affect gender, culture and development?

Feminism is a movement designed to attain the liberation of women, and end their oppression in society by empowering them to realize their rights.

It is also concerned with ensuring that both males and females have the same opportunities. Patriarchal societies, largely influenced by culture, misconstrue and stereotype feminist movement, linking them to several myths.

Feminists are perceived to be angry, selfish women, who have no sense of humor, and tend to exaggerate the discrimination they face. This misconception is influenced by culture. In patriarchal societies, men are described with vocabularies such as daring, aggressive, domineering, brave and competitive while women are described as submissive passive, dependent, caring and calm.

Since culture defines both sexes with particular traits, both are stereotyped when there is no conformity to cultural expectations. Feminists, who are unhappy with the ever-present inequality in society, try to resist the oppressions of the patriarchal society. In so doing, the cultural values and norms of society are challenged. For instance, in some traditional societies, it is distasteful to see women publicly expressing vexation.

Such an act is regarded masculine not feminine and is expected to be exhibited by men and not women. This myth has influenced gender role socialization. Girls are brought up not to question the ills of society to avoid backlash, while boys are nurtured to do so. As such, there is unequal participation of both genders in public discourse, although females outnumber males, which affects development.

Another myth which is influenced by culture and hence, impacts on gender role socialization is that feminists hate men or want to take the place of men and create systems where they will dominate over men. Closely linked to this myth is the perception that feminists are lesbians who hate men.

The Ghanaian culture for instance, has supported male domination and subordination of women leading to gender inequality. Any attempt on the part of women to bridge the gap between men and women is interpreted as men haters who want to wield power and control men.

A derogatory name given to such women in the traditional Ghanaian community is â€œObaaberimaâ€, translated as â€œgirl-boyâ€. Additionally, the hatred of an organized women front where gender inequality will be challenged has resulted in such women being described as lesbians. The traditional Ghanaian society abhors homosexuality and would jump at the least opportunity to discredit such people. To preserve the already firm grounds for males, girls are socialized to be second to men, play supportive roles and be dependent on men.

They are taught to reserve leadership opportunities for men. Boys on the other hand are socialized to be leaders who must never leave room for women to compete with them.

This grows into male chauvinism where they exercise power; create insurmountable structures in society to maintain the dependency, oppression and discrimination of women. Such culture and gendered roles do not empower women to take the fort in developmental discourse, so as to avoid the possibility of being called a man-hater.

In places which present leadership opportunities, women who have been socialized to perceive leadership as the preserve of men, relinquish their opportunity for men.

Also, due to the rejection faced for being described as a lesbian, females vehemently avoid women-centered activities which could lead to championing of their liberation, affecting their overall development.

Another myth linked with feminists is that such people reject motherhood and anything feminine. Since the Ghanaian culture defines what is feminine and that which is not, behaviors or conducts contrary to the socially accepted norm is regarded as a rebuff of the feminine niche.

For instance, a womanâ€™s education or career advancement is questionable in traditional Ghanaian society. It is perceived that at a certain age, a woman must put a hold on her educational or career ambitions and take her place in the home; caring for her family.

Some girls are therefore socialized not to be overly ambitious in life, and conform to societal expectations which include marriage, childbirth and family nurturing. They are socialized that no matter their qualifications, their place is the home. On the contrary, boys are socialized to give off their best, reach the peak of their education and career because they are the heads in society.

Based on this socialization, female development is hampered, as some parents do not encourage the participation of their girl children in higher education. Subsequently, the educated males who occupy positions of power create unfair systems, and suppress the activities of females who resist their oppression.

Men, therefore, continue to be in authority, be the voice of society and keep women marginalized. Feminism is also misconstrued as a white middle-class movement that neglects the rectification of the social and economic problems of society. The movement is perceived to be a racial movement which perpetuates the very social and economic inequality that is abhorred in society.

The cruel, inhumane treatment, and white supremacy experienced during the colonial era have left an indelible mark in the Ghanaian society. Feminism, thought to be a foreign movement and to an extent, a legacy of formal education, is rejected to avoid the likelihood of repeating such evil history.

It is also considered a means to adulterate the Ghanaian culture-hence its fierce opposition. This myth establishes the socialization of females to be homemakers as a means to keep them submissive, while men engage in activities outside the home. Such a misconception is detrimental to development.

Feminism empowers women, creating avenues where women are valued in society. For example, through feminism, societies, where women could not exercise their franchise, do so now. Additionally, some women through merit have held or are in positions of power.

Others believe that feminist movement is unnecessary in recent times because the movement has made women equal now. The struggle for gender equality has somewhat led to the involvement of women in society since then. Their participation however, does not equate to men but cannot be entertained in society- hence the myth of attaining equality.

Females are taught to be content with their level of development in society because they have the same opportunities with men. However, society is quick to forget the perpetual discrimination against females in years past, which has created gender imbalance and unfair representation of females.

Females who have a desire to climb higher heights in all spheres of life dash those aspirations, and succumb to cultural expectations, while their male counterparts aim for the citadel.

There is also the myth that women cannot be feminine and feminist concurrently. Feminism is characterized by challenging structures, questioning systems, rejecting predetermined statuses, traits, which are not culturally accepted to be feminine in the Ghanaian culture and other patriarchal societies. Women are expected to accept whatever is thrown at them without objections, a quality which is contrary to what feminists do.

This makes it unacceptable to be two-faced; be submissive-dependent culturally, and assertive-aggressive for the movement. Girls are therefore socialized to kowtow to cultural expectations of femininity. In some communities, females are encouraged to avoid feminism so they can be married or preserve their marriage.

This gives males an opportunity to use marriage as bait to oppress females, accounting for the rise of domestic violence against women in society. Women are practically the lifeline of most families. Their abuse leaves them ill-suited to care for the family, affecting overall development.

Society misinterprets feminism to be a movement that liberates women at the expense of men. It is interesting to note that feminism liberates both men and women. Feminists encourage both sexes to break loose from stifling social formality. In this light, it is acceptable for men to show emotions (sadness) that culture forbids. In the traditional Ghanaian society, men must not cry or express sadness- a trait likened to women.

A man who portrays such is stereotyped and called â€œKojobesiaâ€ in the Akan society, signifying a â€œgirly-manâ€. While feminism encourages men to be expressive, it equally allows women to show bravery, challenge systems, aspire higher and be the best they can; empowering all gender.

Has my attempt to demystify feminism caused tetchiness or invigoration?