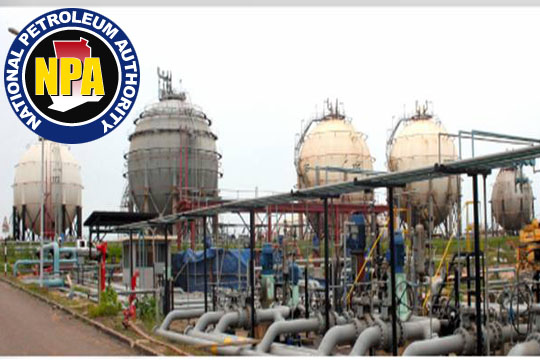 Ghana’s downstream petroleum regulator, the National Petroleum Authority, which is responsible for enforcing fuel quality standards on the market issued the notice below last week but it is only now getting attention. 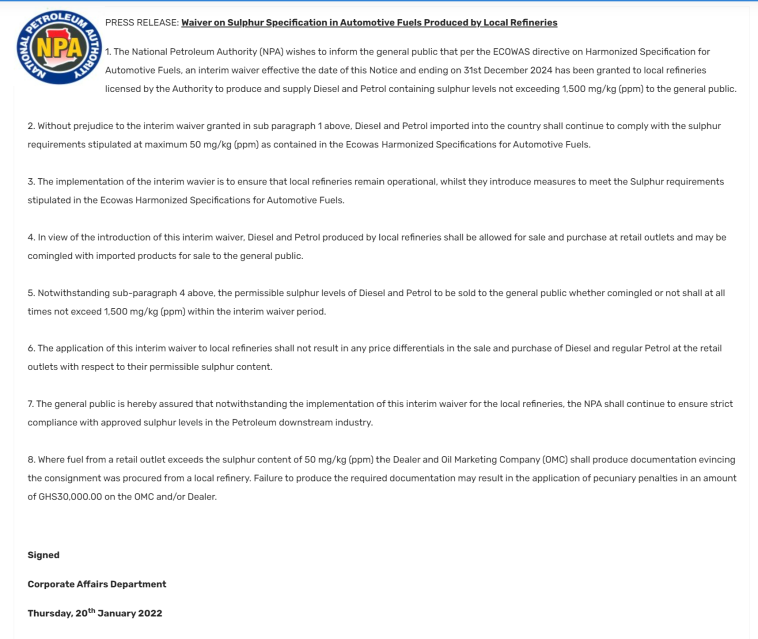 It is a curious edict. It says in simple language that fuels refined in Ghana can have as much as 1500 parts per million (1500 PPM or 1500mg/kg) content of sulphur. More than that, such dirty fuel can be mixed up with imported fuel, which, on the other hand, must still adhere to the ECOWAS standard of 50 parts per million (50 PPM or 50mg/kg). Worldwide, countries that take public health seriously are waking up to the frightening effects of air pollution and aggressively pushing for fuel content to go as low as 10mg/kg.

Here in Ghana, Environmental Protection Agency measurements show regularly that in large cities like Accra, the annual concentration of Particulate Matter (think soot, smoke, dust, all that nasty stuff) is often far above the World Health Organisation (WHO) standard of 10 micrograms per cubic meter of air. The Global Burden of Disease Study (GBD), the definitive global guide on epidemiology, advises countries to aim for 7.3 micrograms, plus/minus 1.5. The table below shows that concentrations in Ghana are routinely 10x what they should be.

Sulphur dioxide, the main output when sulphur in fuel is burnt in combustion engines, exacerbates particulate matter (PM) effects in very complex and dangerous ways. The correlation between sulphur content in fuel and PM emissions is so strong as to be literally linear (one major route being the formation of sulphate particles in the air).

Sulphur dioxide itself causes serious respiratory and other health issues. From an environmental health perspective, acid rain and acidification of water bodies have all been traced to the noxious gas. Commentators tend to blame mining for Ghana’s increasing acid rain problem, with its catastrophic impacts on agriculture and biodiversity. But emissions from dirty fuel is as much a problem.

Dirty fuel indeed accounts for more than a third of all PM emissions in observations.

Not surprisingly, the number of people who experience strokes, cancers, heart disease, and other harms (including, for the very unlucky, death) as a result of the worsening air pollution in Ghana exceeds 500,000 every year.

This was the context that informed the decision in 2013 to tighten regulations on sulphur content in fuel. At that time, due to concerns about transition issues, the maximum limit was pegged at 3000 PPM. Increasing evidence of the intensifying health damage being caused by air pollution led to an ECOWAS-wide resolution to limit sulphur content to 50PPM. In November 2016, Ghana set a deadline of July 1st 2017 for all market participants to adhere to the guidelines, except local refineries. When ECOWAS set its timeline to 2020, Ghana reassured the environmental standards community that it intended by that year to be fully compliant, including in its local refineries.

The problem is that Ghana has never really been truly compliant. Importers of refined fuel have flouted the relevant regulatory directives for a long time. And the latest decision to push local refinery compliance to 2023 is merely another gimmick.

In 2020, Broni-Bediako and his research collaborators at the University of Mines & Technology in Tarkwa sampled fuel from several fuel retail outlets in the town. They found concentrations of sulphur as high as 5x the legal limit in some of them. More frighteningly, not a single sample picked up conformed with the regional standard. (Minor distinctions among gasoline, diesel, LPG etc. don’t matter for the ensuing analysis).

What is sinister about findings such as the UMAT one is the way they reinforce longstanding concerns about poor and complicit regulation in the downstream petroleum sector. Observers have persistently complained about rampant corruption.

In 2013, freelance investigative journalist, Sally Hayden, who has worked with the likes of Reuters and the Financial Times, pierced through the fog to gather clear evidence of serious abuses across the value chain. Inept regulators, rent-seeking politicians, corrupt intermediaries and a largely inert public have formed a combustible mixture literally fouling the air at every turn.

In its review of local capacity, the EPA lists a litany of gaps which raises serious questions about the actual air quality management being done in Ghana today. The claims by the NPA that it will ensure that, at least, imported fuels meet the 50 PPM standard (whilst allowing commingling with non-conforming fuel that will complicate enforcement) are seriously contested by evidence of seriously weak ability to properly enforce the standards.

Nearly 5 years after local refineries, principally the Tema Oil Refinery (TOR), were given special treatment to get their act together and stop supplying dirty fuel to the market, the NPA is back with another lame excuse for continued pollution.

TOR’s reasons for why it cannot meet the higher regional standard (which is still 5x higher than the limit allowed in more health-conscious countries) remains the same: it cannot afford to. This is lame for two reasons.

Its former Chief Executive greatly exaggerated the cost of investments needed to acquire equipment to desulphurise the fuel it sells. The $300 million he quoted is nearly eight times what experts in the US typically estimate for refineries significantly bigger than the 45,000-barrel refinery operated by TOR. This is the case even when they opt for the more expensive standard catalytic hydrodesulfurization method.

For example, a benchmark study on hydrotreater installation/conversion to meet the American EPA’s much more stringent (and thus more expensive) sulphur content guidelines show that, adjusting for TOR’s technical and operational parameters, $500 per barrel per day is a viable cost estimate . In TOR’s terms, that is less than a $30 million investment (likely much lower because of the 5x laxness in standards). Another way of looking at it is the cost per gallon approach, where the experience from the US, adjusted to Ghana’s context, suggest about an extra 10 pesewas per gallon of fuel. Meanwhile, new adsorbent based technologies promise to radically lower desulfurization costs multifold.

Equally valuable to know is the fact that TOR can avoid a significant proportion of the cost by simple crude selection. Given prevailing prices in Ghana, no refiner has any business using anything other than light, sweet, grades of crude.

So, for example, using Bonny Light crudes from neighbouring Nigeria (say, under a revamped Government to Government supply deal) immediately reduces the sulphur content to 1300 PPM (considerably lower than the NPA’s 3000 PPM) even before advanced techniques are applied to lower the content further.

If next door Ivory Coast can license American technology to meet global (not just regional) sulfur content standards, it gets harder to convince rational people that Ghana cannot (SIR has in fact been producing gasoline at the 10 PPM standard for many years now, so this investment was to lower cost and cover other fuel fractions).

Nor is the fact that TOR is an arthritic performer, constantly shutting down production whenever it runs out of funds, a reason to dismiss the dirty fuel matter. The government has no plans to permanently close it down. Whilst it remains an epileptic supplier of fuel to the market, and to the extent that it engages in various logistics activities (including medium-term storage), its noncompliance with the standards has been found to complicate the enforcement picture as a whole, especially because of the commingling loophole.

All the arguments canvassed in this brief essay would have been the same ones that most environmental and Civil Society extractive sector actors and commentators would have made to the NPA if it had consulted properly. But it didn’t. It does not seem to have consulted even the Ghana Standards Authority (the actual domestic custodian of the sulphur standards) and the Environmental Protection Agency for formal, written, opinions before issuing this kneejerk waiver. The EPA and the DVLA, for instance, are required, under current policy, to verify if vehicle filters and other emission controls can handle the tailpipe exhaust requirements in line with air quality standards. Decisions about fuel properties must thus be subjected to a scientific, multistakeholder, engagement test before being made and publicised.

The tendency of those who wield power in Ghanaian and African society to act without regard for public and civic interests will literally suffocate all of us if we don’t keep speaking up. On this issue of sulphur pollution, it clearly starts with calling out the NPA loudly and clearly.

Bright Simons is a respected Ghanaian social innovator, entrepreneur, writer, social and political commentator. He is the vice-president, in charge of research at IMANI Centre for Policy and Education. He is also the founder and president of mPedigree.