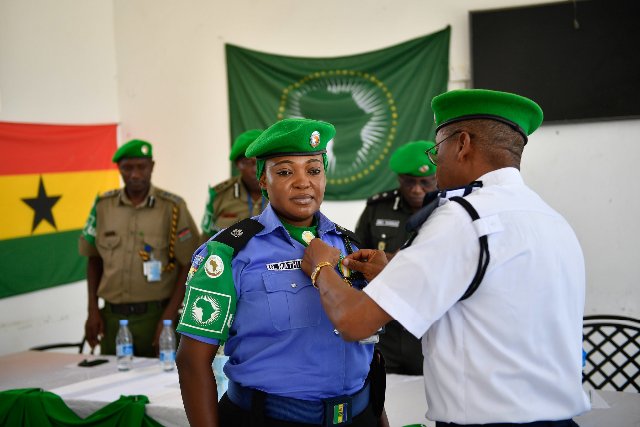 AMISOM Police, Chief of Staff, Rex Dundun, pinning a medal on a Police Officer during the medal parade ceremony
Shares

Some 32 police officers from Ghana Nigeria, Uganda, and Zambia have all been honoured by the Union Mission in Somalia (AMISOM).

This was after the officer completed one year of service in Somalia under AMISOM are due to return to their home countries at the end of February.

Augustine Magnus Kailie, who is the AMISOM Police Commissioner, Assistant Inspector General of Police (AIGP) on Saturday decorated the officers at a medal parade held in Mogadishu.

AIGP Kailie commended them for contributing to the stabilisation of Somalia and enabling the AMISOM police component to fulfill its mandate to train, mentor, and advise the Somali Police Force (SPF).

He said that through their period of deployment, the police officers had contributed to international peace efforts and directly impacted on the lives of the Somali people.

â€œIn the future, some of the Somali police officers you trained and mentored will go on missions elsewhere and be the best peacekeepers because they have learnt from you,â€ said Kailie told the departing officers.

He then advised them to utilise the knowledge gained their time of service in AMISOM for personal development and career growth.

The AMISOM Police Chief of Staff, Deputy Commissioner of Police (DCP) Rex Dundun said the 32 officers had performed exceptionally in the different units of deployment.

â€œWe had distinguished officers, who can hold their own at the highest level of policing internationally. Some of the departing officers were responsible for coordinating and commanding a whole state, and they performed well,â€ noted Dundun.

Assistant Commissioner of Police (ACP) Akaninyene Unaam from Nigeria, the highest-ranking of the officers, thanked the Somali people for their cooperation.

â€œThe Somali people have been wonderful. Different people, different cultures, different environments, and traditions, but I must say they are very receptive, welcoming, and generous,â€ said ACP Unaam.

Inspector of Police (IP) Mildred Ntono, from Uganda, said that she felt privileged to have served under AMISOM. â€œI feel I have played a part in the peacebuilding of Somalia,â€ she said.

Deputy Superintendent of Police (DSP), Busari Tajudeen from Nigeria, said the year of service under AMISOM was also an opportunity to learn.

â€œI am returning home, not the way I came. I have also seen a visible transformation in the Somali Police Force,â€ remarked Tajudeen.