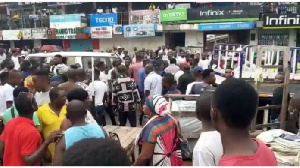 The Ghana Police Service has confirmed that nine (9) persons have been arrested over their involvement in the chaos that ensued between GUTA and foreigners at the Kwame Nkrumah Circle on Monday.

Some GUTA members last Sunday night took the law into their own hand and locked up about 600 at circle they suspect are foreigners who are in breach of the Ghana Investment Promotion Centre (GIPC) law.

During the clash between local traders and foreigners last Monday some were injured whilst others were arrested by the police.

''On Monday nine persons were arrested for their involvement in the incident that occurred at Tiptoe lane. Since then they have been investigated for their individual involvement. As I speak to you now we have just gone for allocation for them to be put before court God willing tomorrow. For now, the police is holding them for conspiracy to commit crime and also for causing unlawful damage and also for rioting.''

She indicated the nationalities of the nine arrested persons are locals and Nigerians with the exception of Indians and Lebanese nationals. She said after Monday's incident there has been police presence to maintain security in that jurisdiction.

The Ghana Union of Traders Association stated earlier today that there is a probability of them opening the shops of foreigners at the Kwame Nkrumah Circle only if they exhibit a level of submissiveness.

GUTA says they want foreigners in the retail business to know that Ghana is not their country, therefore, they must obey the laws of the land in regards to trade.

However, President Akufo-Addo yesterday addressed the leadership of GUTA and criticised their decision to shut down shops owned by members of Nigerian traders. He stated that GUTA does not have the right to take the law into their own hands.

“People cannot take the law into their own hands and enforce the law. If we do that, Ghana will become chaotic. We have to be careful about this phenomenon of taking the law into our own hands about situations that government is yet to resolve” President Akufo-Addo said.

Meanwhile, the Nigerian traders Association in Ghana has praised President Akufo-Addo over his stance in their impasse with GUTA.

They said the President has proven he is unifier and leader.