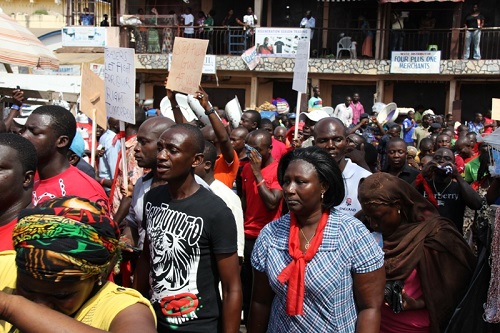 Ghana Union of Traders Association, GUTA has threatened to replicate the closing of foreign shops nationwide if the government fails to enforce the retail laws.

The Greater Accra chapter of GUTA on Monday locked up about 600 foreign shops at Kwame Nkrumah Circle. According to GUTA, the government has failed to enforce Section 27 (1) of the GIPC Act, which bars foreigners from doing retail business.

First Vice-Chair of the Greater Accra chapter of GUTA, Nana Kwabena in an interview with Citi FM said the action will be replicated across the country until the government enforce the laws on retail business.

"Other places are also going to start locking the shops in other places, the whole of the country, all that we are saying is Ghana laws says they shouldn't be in the retail market so they should move out, the shops will be locked till they move out of the market if they want to move their things from the market we will open the shops for them to do so..."

This is not the first time GUTA has locked up foreign shops, some major trading centres in the country have witnessed the actions of GUTA who also accused the foreigners of selling substandard products.

Suame Magazine in Kumasi and Opera Square in Accra have been the centre of action for GUTA and just yesterday Nkrumah Circle.

Ghanaian traders in November locked up about 15 Foreign shops at Opera Square in protest of their involvement in retail trade.

The traders embarked on an exercise to relock shops they closed last week, according to them they had information that the foreigners had used land guards to open the locked up shops.

The traders have on many occasions both in Accra and Kumasi locked up shops of foreigners in the retail business.

Some of the traders who locked up the shops said they are simply enforcing the laws of Ghana.