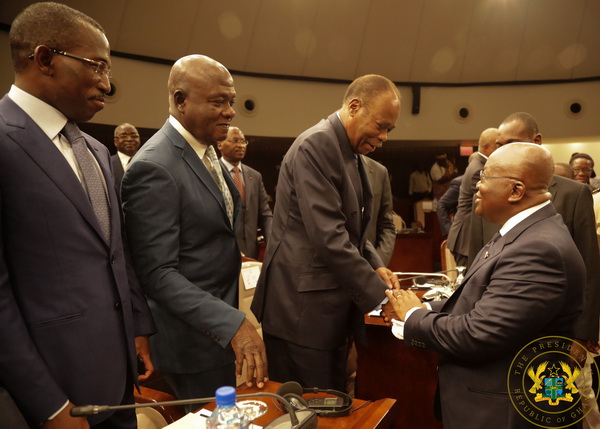 Akufo-Addo exchanging pleasantries with one of the Togolese opposition leaders

Today's meeting, which comes few weeks after the opposition parties suspended all forms of protests and demonstrations aimed at forcing President Faure Gnassingbe to step down, is to report on progress made so far in the ongoing dialogue aimed at restoring peace in Togo.

President Akufo-Addo has been a mediator in the political crisis in that country after weeks of protests against President Faure Gnassignbe.

A recent meeting was held between President Nana Akufo-Addo and representatives of the government in Togo to calm the opposition parties.

In October 2017, President Nana Addo held a closed-door meeting with Gnassingbe over the development in Togo.

The President had at the time revealed that the meeting was aimed at bringing the crisis to an end.

26 Togolese nationals were arrested in Ghana in October, 2017 for attempting to stage an unlawful demonstration over the political situation in their country.

According to the Accra Regional Police Operations Officer, Chief Superintendent Kwasi Ofori, about 300 Togolese had to be dispersed lawfully at the Kawukudi Park because their intended action was in clear breach of Ghana’s public order act.

That was the second time Togolese nationals in Ghana had tried demonstrating in solidarity with efforts back home by the opposition to have presidential term limits.