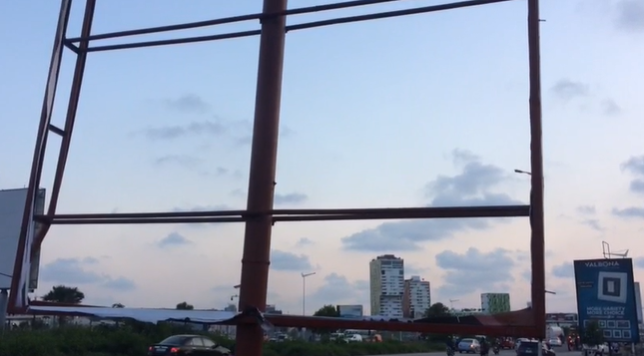 A billboard supposedly promoting LGBTQI activities on the Accra-Tema Motorway has been pulled down by City authorities.

This was after some MPs contended that the billboards one of which is located on the Accra-Tema Motorway are in violation of Ghana’s laws which criminalize the practice.

One of the MPs sponsoring the anti-gay bill Sam George had earlier issued a 24-hour ultimatum to authorities to pull down the billboard, which he described as illegal.

Member of Parliament for Ningo Prampram on Thursday evening disclosed that the billboard has been pulled down after a media engagement with city authorities.

We can get results from the authorities (NDC or NPP) if we unite and collectively demand the changes we desire. True power belongs to the people. The billboard has fall 'frat'. Power to our cultural sovereignty. 🦁💪🏾🇬🇭 #PassTheBillNow pic.twitter.com/XXGOrDlLkg

Addressing the media at the site of one of such billboards at the Accra Mall this week, MPs for Ningo-Prampram Sam George and his colleague from South Dayi Rockson-Nelson Dafeamekpor demanded the arrest and prosecution of persons behind the billboards.

“Over the weekend, our attention was drawn to an illegality that flies in the face of the Constitution of Ghana – Articles 11 and 26 which talks about Ghana’s cultural sovereignty. We noticed that a billboard promoting the activities of the LGBTQ activities has been mounted along the motorway.”

“As sponsors of the bill before Parliament and as members of Parliament who represent the aspirations and will of Ghanaians, we have deemed it important to show up here today to register in the strongest way our displeasure, discomfort and abhorrence for this unholy, unculturable and untraditional advertisement that has been put up on this road,” the MP had said.

Convenor for the National Coalition for Proper Human Sexual Rights and Family Values Moses Foh Amoaning disclosed activities of the LGBTQI+ members are already endemic in certain second cycle schools and thus must be resisted with alacrity.

He warned the diplomatic community in Ghana against hoisting gay pride flags this year as happened in the past since it’s a violation of Ghana’s laws.

President of the Coalition of Muslim Organizations of Ghana Hajj Abdel-Manan Abdel-Rahman disclosed his organization is profiling all MPs relative to the passage of the anti-gay bill.

He warned a massive campaign will be launched against MPs who are deemed to be frustrating the legislation come 2024.