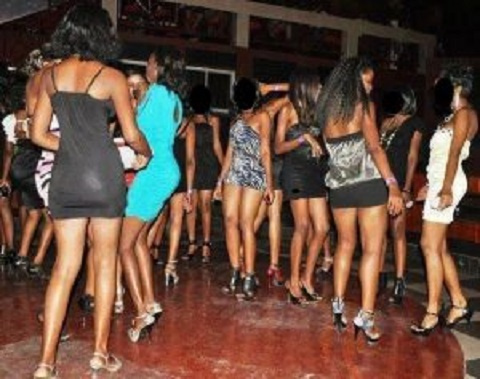 Supreme Court Justice nominee Professor Prof. Henrietta J.A.N Mensa-Bonsu says the law on prostitution in Ghana favours men because the women who are often the sex sellers are the ones arrested and prosecuted.

She was answering questions during her vetting by the appointments committee of parliament on May 12, 2020.

She said half the time the men who often patronize the services of these prostitutes who are mostly women are left to go scot-free while the ladies are often arrested and penalised.

She disclosed that it is not fair and it is was about time the law dealt with both the buyer and the seller.

"I have a problem with the law on illegal sex work (Prostitution) because only the seller is dealt with and the buyer is left to go free. I think this is an unlawful way to penalise the female because the male who is the more influential party with the cash is left to go free, we must look at this very well."

Prostitution in Ghana is illegal but widespread, so much so that many Ghanaians are unaware that it is prohibited.

Professor Mensa-Bonsu is a Professor of Law at the University of Ghana, School of Law, and former Director of the Legon Centre for International Affairs and Diplomacy. She is also fellow and current President of the Ghana Academy of Arts and Sciences.

Professor Mensa-Bonsu has researched and published extensively on Criminal Law and Criminal Justice, Family Law, and Children’s Rights. Currently, she teaches Criminal Law, Jurisprudence, and Conflict Resolution Theory and Practices at the University of Ghana School of Law.

On the Peace and Security front, Henrietta Mensa-Bonsu has served in several high-level national and international capacities.

On the national plane, her most prominent assignments were her membership of the National Reconciliation Commission, the Ghana Police Council, and currently the National Governing Council of the African Peer Review Mechanism.

In 2007-2011, she was appointed the Deputy Special Representative for Rule of Law in the United Nations Mission in Liberia (UNMIL).

Since 2011, she has twice served as a Civilian Mentor to ECOWAS Mission Leadership Courses, (2012, 2016) and three times as a Mentor and Resource Person on the U.N. Senior Mission Leadership Course (2014, 2016, 2017); and on both the Pilot and First Police Commissioners Course. She has also twice served as a Resource Person on Leadership courses for women in the UN, and for the Geneva Centre for Security Policy (GCSP) and three times on the UN Staff Officers Course at the Kofi Annan International Peacekeeping and Training Centre (KAIPTC).

In 2014-2015, she served on the UN Secretary-General’s High-Level Independent Panel on Peace Operations (HIPPO). She has served as a member of the Advisory Board of the African Peacebuilding Network (APN) of the Social Science Research Council of the USA.

She currently serves on the National Development Planning Commission of Ghana and STAR-GHANA Foundation – a grant-making civil society Foundation; and Board of Trustees of the Methodist Church, Ghana.