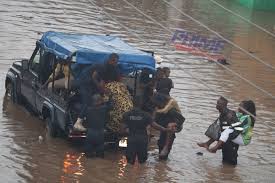 Ghana Meteorological Agency has predicted that there will be more rains until November this year.

The agency also cautioned the public to take notice of the daily forecast before going out. There have been some intermittent rains for the past two days leaving some areas in Accra flooded.

"Whatever is happening is strange and not too strange because currently we are in the minor season and at certain times of the year we realised that some of the minor seasons become very prominent more than the major seasons, so what will happen is that we will collate data and see how far has the minor fared with the major raining seasons, we issue weather notice in the morning, afternoon and evening, the morning one is 24 hours, afternoon 24hours and same with the evening, the rain will stop in the early part of November."

Some residents of Accra in June this year were displaced after a heavy downpour. Apart from displacing residents, some roads were rendered unusable.

Some residents who leave close to Odaw river said:'' When the rains started all my clothes were carried away. I don't understand why they(dredge masters) keep the sand at the bank of the Odaw. It renders the entire job useless''.

Residents of Adabraka were not exempted, reports indicated that scores of residents as at 6 am stood in front of shops. According to them, they have been standing there since midnight. School children were also standing there shivering and feeling cold.

''The rains entered our rooms and the rooms are flooded. We don't have water to bath them for school. Their uniforms are wet. The water level was even around my neck''.

Also, Cecilia Aduku a pupil who was not able to go to school because of the flooding said that: ''Right now am standing here with my mother waiting for the flood to go down. I am worried my mates in school will be learning and I will be in the house doing nothing''.

Some parts of Accra were not left out as parts of Ashiaman, kaneshie, Avenor, Asylum down were all affected.