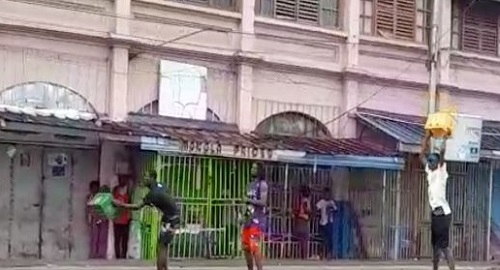 A peace walk at James Town yesterday turned bloody between supporters of the NDC and NPP in the Odododiodoo constituency.

Some persons have been wounded following the attack in one of the Greater Accra Region’s known hotspots ahead of elections.

Videos in circulation have seen men in party colour throwing stones, bottles and other projectiles on a street at each other.

An eyewitness, Anny Aggrey who narrated what brought about the bloody clash said, "All those people who used to sleep here were here when the NDC supporters were passing, and they said one of them came out of the crowd and broke a vita milk bottle and they tried to talk to him to stop what he is doing, so when they were engaging him he went back to the crowd and signalled them and all of a sudden they started throwing bottles."

PRO for Greater Accra Regional Police Command DSP Efia Tenge said no arrest yet but investigations have begun into the incident.

"No arrest has been made yet but the situation is calm and effort are underway to get some persons who names have been mentioned for allegedly initiating the fight arrested as investigations continue."

Reports of violence have been noted since the start of 2020.