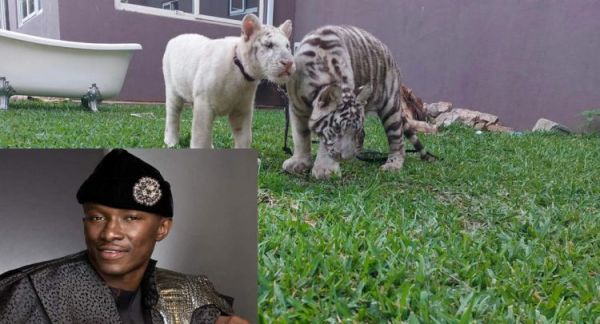 The Ghana Police Service in a statement says the Wildlife Division of the Forestry Commission will soon relocate 2 tigers in Freedom Jacob Caesar's Wonda World Estates.

According to the police, the Accra Regional Police Command on Thursday, May 19, 2022, received a complaint that some tigers were being kept in a residential neighbourhood in Accra.

Preliminary investigations have established that a resident in a gated community in Osu is keeping two tigers under lock in a cage in his house.

Police have reached out to the Wildlife Division of the Forestry Commission and the efforts are underway to relocate the animals to an appropriate facility. 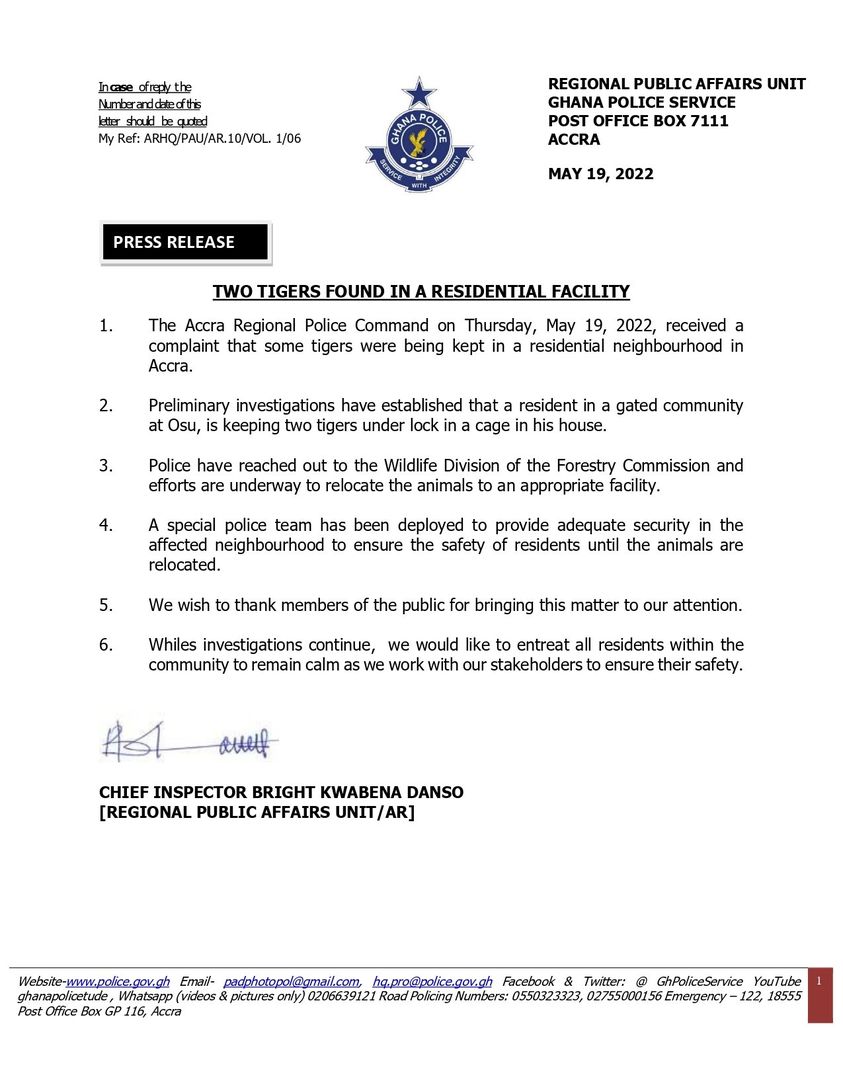 Some residents at Wonda World Estates, Avenue Lincoln near the British High Commission at Ridge in Accra, have expressed worry over the presence of two tigers in the estate believed to be owned by business mogul, Nana Kwame Bediako, popularly known as Freedom Jacob Caesar.

The presence of the tigers in the community, according to the residents, is making them unsafe.

According to Daily Guide sources, all efforts by the residents to get the owner or the management of the facility to evacuate the tigers have proven futile as on most occasions, their complaints are met with hostile responses.

Some of the residents claim that “the animals stink. Those animals are held inside an apartment where there is no access to proper fresh air. As soon as the door is open, you sniff a strong unpleasant smell emanating from them,” one resident said.
Another resident also said, “They are opened early in the morning and then sent inside around 10am. They pee and poo on the floor. They also make noise which disturbs our sleep.”

“There are no tranquilisers nor any proper training. In the event of any unfortunate incident, no one knows what would happen to us,” lamented another.

According to the residents, they noticed the presence of the animals since November last year when they were cubs and had thought that after a short period the animals would be taken to an appropriate facility, but that was not to be.

“It doesn’t make any sense to have wild animals, tigers for the matter, in an estate in the heart of the city where there is just less than a meter between the houses and also without any proper training and care [for them],” they bemoaned.

They also alleged that while trying to engage the owner to evacuate the animals, he rather built a structure for them right by the side of their apartment.

“When we saw them building [the structure], we asked them which institution gave the authorisation for them to put up such structure for the animals in a residential area.

There are reports that one of the tigers once confronted a resident (male) who had to run for his life.

Another resident is also alleged to have sustained some injuries as a result of an encounter she had with one of the tigers which left bruises on her feet.

The residents also indicated that they reported the development to the Ghana Wildlife Society about a week ago, and were promised to take the matter up to be looked into but there has not been any positive feedback since.

The residents continued that no official from the society had come to tell them anything but spotted some officials believed to be from the Society in the company of Nana Bediako on Sunday, May 15, 2022 in the estate but “they did not tell us anything.”

“Anytime we called to find out how far, they keep tossing us. We are told sometimes that the officials had traveled, and a lot of back and forth.

“They don’t tell us anything and that is the reason we intend reporting to the matter to the police if we don’t hear from Wildlife Society after some time.”