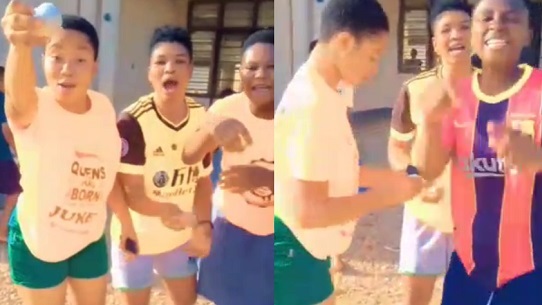 The Ghana Education Service (GES) has dismissed eight female students of the Chiana Senior High School in the Kassena-Nankana West District of the Upper East Region for making derogatory statements against President Akufo-Addo.

The dismissal of the students follows an investigation into the case.

Before the dismissal, the students had been on suspension.

The GES, in the dismissal letter, addressed to parents of the students, described their conduct as very undesirable, and contrary to the acceptable standards of conduct generally required of any student in Ghana’s educational system.

The students who had been on suspension over the video, have now had letters handed over to their guardians dismissing them for their misconduct.

Explaining the reason for their sack, the GES explained that they have been dismissed for conduct that is “very undesirable, and contrary to the acceptable standards of the conduct generally required of any student in the educational system of Ghana.”

The dismissal letter dated November 29, 2022, and signed by the Director General of the GES, Dr. Eric Nkansah asked that the guardians ensure that their wards hand over all school property to the school before leaving the school for good.

In November last year, the female students in a video, that went viral on social media, rained insults on the President, accusing him of bringing about economic hardship among others.