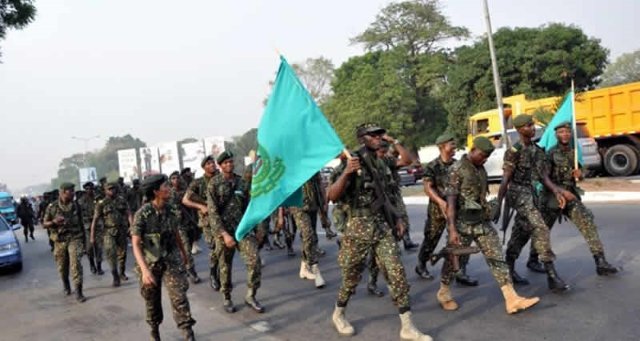 File photo: The Officers are expected to undergo advanced specialised training in anti-terrorism, crowd control and weapon handling, among others.
Shares

The Ghana Immigration Service (GIS) are bracing themselves to fight counter terrorism as they have established a Rapid Response team.

The unit which will be stationed at the National Headquarters of the Immigration Service in Accra is to be replicated in all Regional Commands subsequently.

Commissioner of Immigration (COI) Isaac Owusu Mensah, Head of Boarder Management made this known on Friday, September 6, at a pre-training briefing for 60 officers who have been selected to participate in a three-week counter-terrorism training which starts on Monday, at Huhunya in the Eastern Region.

The Officers are expected to undergo advanced specialised training in anti-terrorism, crowd control and weapon handling, among others.

The GIS has identified the threat of terrorism as a major challenge facing the country’s borders.

With only 45 border posts controlling a land area of 2,400 kilometres, the Service says it is simply impossible to control the movement of people crossing into the country.

Mr Mensah further explained that the setting up of the special operational team was in response to national security needs and cited the ongoing ‘Operation Conquest Fist’ in the Upper East and Upper West regions as an example.

He noted that the new Unit would be a permanent stand-by team for all such operations. “This will be replicated in all the sixteen (16) regions, starting from the Headquarters which will form the nucleus of the regional rapid response teams,” he added.

The Head of Border Management observed that, with the rise of terrorism and its related activities in neighbouring countries, it was appropriate that the Service as the first line of defense at the frontiers, hold itself in readiness to prevent any possible threat of terrorism.

“In the wake of all the security issues occurring in our neighboring countries, this is a preemptive move to make sure any attempt of terrorism will be quickly responded to and nipped in the bud to maintain law and order in the country,” he added.

On his part, the Head of Operations, Deputy Commissioner of Immigration (DCOI) Isaac Lourtey, stated that all countries around the globe were whipping up security to prevent and deter terrorism and other organized crime. “It is important for us to follow suit” he added.

He entreated the Officers to take the training seriously, and noted that, the skills to be acquired from the training would serve as a career booster. “We hope no casualties will be recorded,” he said.