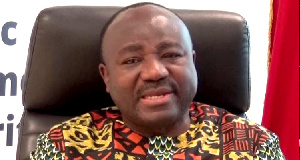 GIPS in a statement explained that Mr. Adjei’s suspension was as a result of a breach of its code of ethics.

Mr. Adjei was dismissed by President Nana Addo Dankwa Akufo Addo after the Commission of Human Rights and Administrative Justice (CHRAJ) found him guilty of conflict of interest in the performance of his duties at the PPA.

The statement further indicated that the dismissed PPA CEO failed to honour an invitation extended to him by the GIPS’ disciplinary committee over the case.

“GIPS wishes to place on record that prior to the commencement of investigations by CHRAJ, it activated its internal procedures in line with its Constitution and Code of Ethics by extending a formal invitation to Mr. Adjenim Boateng Adjei to meet with the Disciplinary Committee but the latter failed to honour the invitation without justifiable cause.”

“In view of the aforementioned and subsequent breach of Article 13 of GIPS’ Code of Ethics pertinent to conflicts of interest, Mr. Adjenim Boateng Adjei is thus suspended as a member of the Ghana Institute of Procurement & Supply. The Institution will update the public on any subsequent action it might take in future on this matter.

In the documentary, a company, owned by Mr. Adjenim Adjei, TDL, was found to be securing many government contracts through restrictive tendering and selling those contracts to others for profit.

The President referred the corruption and conflict interest aspects of the case to the Office of the Special Prosecutor and CHRAJ respectively.