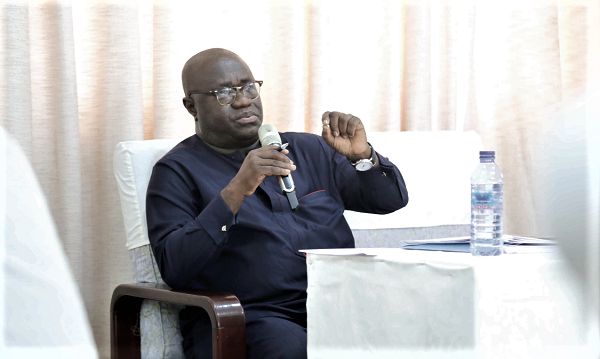 Professor Emmanuel Kwesi Aning, Director at the Faculty of Academic Affairs and Research, Kofi Annan Peacekeeping Training Centre has outlined some key areas that security agencies must focus on in their intelligence gathering and analysis.

According to him, this will help the security agencies to identify the relationship and connection between crimes for them to know when and where possible crimes can happen.

Speaking on Joy FM on the back of the murder of the Mfantseman MP Ekow Quansah Hayford, he said aside knowing how to process the various data available on crime, the security agencies must focus on strategic assessment, tactical assessment, target profiles and problem profiles.

Prof Aning also called on the government to deal with the supply and demand of firearms in the country.

He said tackling other issues and not focusing on the demand and supply of firearms will not solve the security issues in the country.

He stated that there has been an increase in access to guns.

"The 850% increase in availability is related to the original baseline survey we did in 2004 for the government of Ghana and the UNDP. So there seem to be certain... of getting access to these guns and using them."

Prof Aning stated that we are at major risk if these concerns are not properly addressed.

"We are at a major risk that is why this conversation should focus not only on the terribly unfortunate murder of my former student but we need to understand the demand side, why do people demand these guns, what are the dynamics driving demand. But even more importantly the supply side because when we turn to take a very simple approach to this we overlook some of the critical dynamics."

Recounting some events of the past, he said a group of transnational criminals were unravelled in Ashanti Region when COP Nathan Kofi Boakye was the commander of the region.

In effect shows that guns are brought into the country from as far as Congo.

"When Kofi Boakye was the Police Commander in Kumasi he unravelled a smuggling transnational criminals group that were bringing in guns from as far as Congo. There were people bringing in guns from Côte d'Ivoire, we are one of the major importers of industrial explosives, so there is something that both makes us a demand-driven enclave with respect to small-arms but certainly also supplying those who need these guns."

Parliament in a statement has called for an expedited investigation into the killing of the MP.