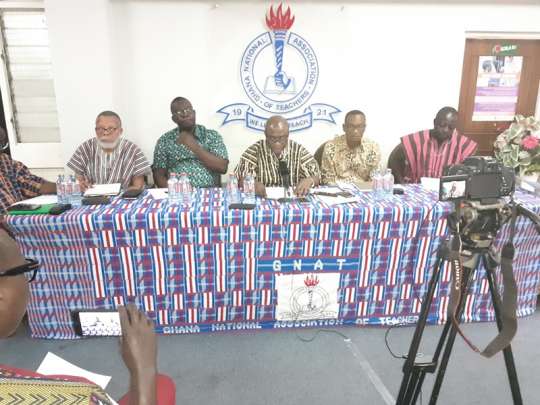 Teacher Unions in the Western Region are calling on President Akufo-Addo to intervene in theÂ Pre-Tertiary Education Bill 2019 that is currently before the Education Committee of Parliament.

They want the government to consider a proper consultation with them before its passage or entirely withdraw the bill until due diligence of its potential impact is conducted.

Addressing the media today, Regional Chairman of GNAT Rev Charles A Carly called on the President to intervene and prevent the passage of the bill into law

''The National Leadership of the Teacher Unions under the Ghana Education Service held a joint press conference on Friday, February 14 2020 at the GNAT headquarters to call on Parliament to humbly suspend the discussions of the bills on pre-tertiary education Act 2019 and sending them copies to study, analyse and make the necessary input into them''.

''We the teacher unions in the Western and Western North Region are of the considered opinion that education is the key to our national development and any attempt to introduce new policies and legislations in education must be done with the active and express involvement of teachers who are the key stakeholders. We call on the President of the Republic to intervene so we have a smooth labour front in the education sector because the bills in their current form will distort the modest gains made in education''Â

He further stated that : ''If this bill is allowed to go through its current state, it has the tendency to break the unified educational arrangement we haveÂ  in now.''