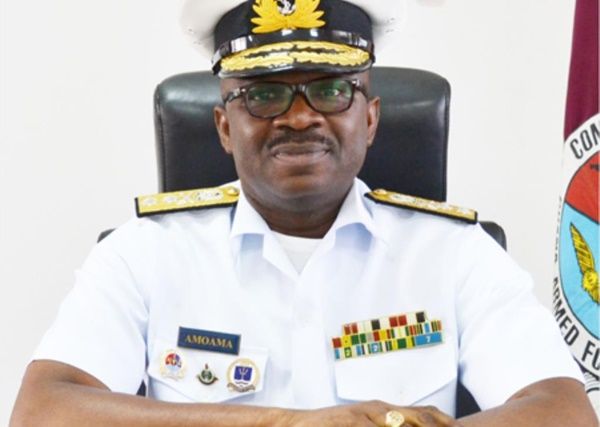 President Akufo-Addo has appointed the Chief of Naval Staff, Rear Admiral Seth Amoama, to act as Chief of Defence Staff.

The appointment according to a press release signed by Eugene Arhin, Acting Director of Communication at the presidency is effective from February 5, 2021, pending consultation with the yet-to-be-constituted Council of State.

“This appointment has been made following the completion of the tour of duty and subsequent retirement from the Ghana Armed Forces, on 5th February 2021, of the current Chief of Defence Staff, Lt. Gen. O.B Akwa. The President has expressed his gratitude to him for his dedicated and meritorious service to the Ghana Armed Forces and to the nation,” the statement said.

Below is his profile culled from the Ghana Armed Forces website;

Rear Admiral Seth Amoama, the Chief of the Naval Staff, was enlisted into the Ghana Armed Forces as a Naval Cadet in 1981 and had his initial training at the Ghana Military Academy (GMA). While at GMA, he was sent to the Pakistan Naval Academy on 1 August 1982, to continue with his training and was commissioned into the Executive Branch of the Ghana Navy in December 1984. He was a proud winner of the sword of honour on graduation in Pakistan.

Rear Admiral Amoama’s military training and qualifications include; International Sub-Lieutenant Course at Britannia Royal Naval College, Dartmouth, UK. He attended the Ghana Armed Forces Command and Staff Courses both Junior and Senior Divisions at Teshie, Accra and was the best all-round graduate on both courses. He was a member of the Naval Staff Course, Class 53 at US Naval War College, Newport Rhode Island graduating with distinction. He graduated from the Nigerian Defence College in August 2013 as the best all-round graduate.

The Chief of the Naval Staff is an alumnus of the Galilee Institute of Management in Israel and holds a Master of Science Degree in Strategic Studies from the Political Science Department of University of Ibadan, Nigeria.

Between March 2002 and March 2003, the Chief of the Naval Staff served as Directing Staff at the Junior and later Senior Division of the Ghana Armed Forces Command & Staff College. He was later seconded to the United Nations Headquarters as Military Planning Officer at the Department of Peacekeeping Operations from February 2005 to May 2008. Admiral Amoama was the Director of Administration at the Naval Headquarters (1 Apr 09 – 31 Jul 13), Military Assistant to the Chief of the Defence Staff (1 Aug 13 – 31 Jul 14) and later the Chief Staff Officer at the Naval Headquarters (1 August 14 – 28 February 16). He also served as the Flag Officer Commanding, Eastern Naval Command from 1 Mar 16 to Jun 16. Until his appointment as the Chief of the Naval Staff, he was the Commandant of the Ghana Armed Forces Command & Staff College from 1 July 2016 to 3 January 2019.

He is married to Victoria with three children. He likes music and flowers.