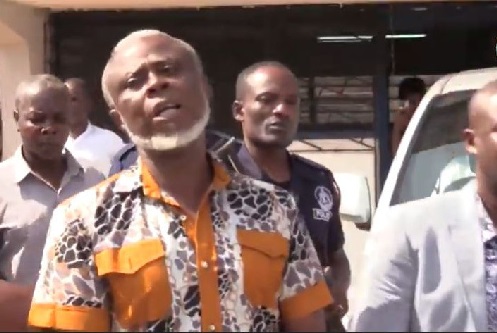 Della Sowah member of Parliament for Kpando constituency in the Volta Region has called for the immediate release Dr. Frederick Mac-Palm.

The Chief Executive of Citadel Hospital was arrested by state security on allegation of plotting with others to overthrow the Akufo Addo led government.

According to Ms. Della Sowah the arrest and continued detention of Dr Mac-Palm is not only unwarranted but an abuse of his fundamental human right as enshrined in the 1992 constitution.

Dr Mac Palm was arrested together with other three suspects for allegedly plotting to overthrow President Akufo-Addo.

Nevertheless, lawyers for Dr Agordzo secured a bail for him after two months battle with state prosecutors in court.

This, Hon Sowah, a Deputy Ranking on Mines and Energy Committee of Parliament in a statement dated February 27, demanded for Dr Mac Palm release from custody.

The lawmaker said the suspect is a responsible family man with lot of dependents under him and would not do anything to frustrate court process.

She added that the people of Kpando felt Dr Mac Palm, their son has been badly treated and has mounted pressure on her their representative in parliament to for his release.

RELEASE DR. FREDERICK YAO MAC-PALM
I, Hon. Della Sowah, the MP for Kpando and the elected Representative of Dr Frederick Mac-Palm (also known in Kpando as Fo Yao), I am compelled to release this statement because my office has been inundated with petitions and cries by family members, including his aged mother Madam Adjo Bulla, his friends and the many dependants of the benevolent medical practitioner in Kpando since his arrest and unlawful detention 6 months ago.

The facts are that, on Friday 20th September, 2019, a team of government security operatives carried out an operation in Accra which led to the arrest of Dr Frederick Yao Mac-Palm, Medical Director of the Citadel Hospital and others for allegedly plotting to overthrow the President Akufo Addo government.

The following Sunday, the 22nd of September, I was at the Citadel Hospital. A large contingent of officers with dogs and equipment came to conduct a search on the premises. With the reputation of the security agencies in Ghana one would have thought that they were going to do a quick job.

Sadly after 6 months, according to the security agencies, investigations are still allegedly ongoing and Dr Mac Palm is still being held in police custody very much in contravention of the relevant laws in this country.

It would be recalled that a senior Police Officer ACP Benjamin Agordzo, who was also being held by the police in connection with the same case was recently released on bail, yet Dr Mac-Palm is still being detained.

Unfortunately, the very courts that distilled the law on bail for suspects and accused persons have continued to deny Dr Mac Palm his bail; a clear infringement on his constitutionally guaranteed human rights.

The already protracted delay in investigating the case and the unwillingness of the state to grant some of the accused persons bail is seriously affecting a lot of people.

Under these circumstances therefore, I am through this medium calling on the Attorney General and the Chief Justice to as a matter of urgency grant Dr Frederick Mac-Palm bail. Indeed, Dr Mac-Palm who I am very certain will be exonerated, will continue to make himself available for investigations and for trial in court.

I wish to emphasise that I am not against the decision by the government to prosecute people who fall foul of the laws, however, as per our laws, suspects are presumed innocent until proven guilty by a court of competent jurisdiction. What I am calling for is to curtail the abuse of the Fundamental Right to a bail of Dr Fo Yao Mac-Palm and others.