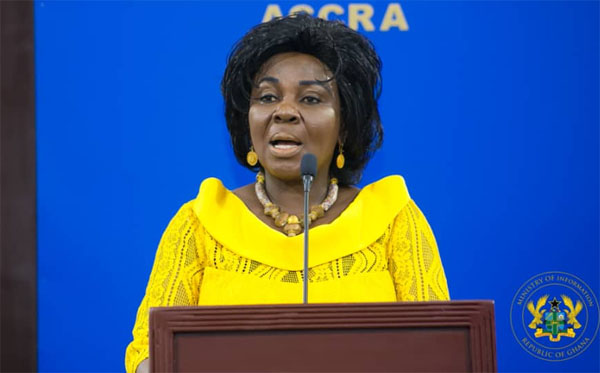 The Minister for Sanitation and Water Resources Cecilia Dapaah says sanitation issues has improved across the country specifically Accra.

Accra over the years has been battling with filth as issues of choke drains, piles of refuse at markets and lack of toilet facilities in households is still a bane.

Madam Dapaah addressing the media on December 3, 2019, revealed that more communities and households have become open defecation free which has generally improved the sanitation issues in Accra.

This she says is because her Ministry assisted homes to construct toilet facilities, she has for the past ten weeks visited all Metropolitans, Municipal and Districts in Accra to access the sanitation situation.

She said the improvement of sanitation in Accra was down to purchasing dustbins, assisting residents to construct household toilets among others.

"From where I sit even without statistics sanitation has improved in Accra. The Ghana project, for instance, has contributed a lot and so far if I am not exaggerating the number of toilets produced is over 120000. We all have a role to play to make our surroundings clean and government will make sure those in charge are held accountable"

Some assemblies were also rewarded for their monitoring of the 1 household 1 bin project.

The Minister in July this year said the President’s vision is a challenge to all Ghanaians to take up responsible roles, with the ministry as the lead, in ensuring that Accra is transformed into a clean and safe city.

“The President is the leader of the country so the vision to make Accra the cleanest city in Africa is a collective challenge to all Ghanaians and not only the ministry. We all, as citizens, have roles to play if the vision can be achieved. The ministry is on course with several initiatives and we require the support of the populace to be successful.”