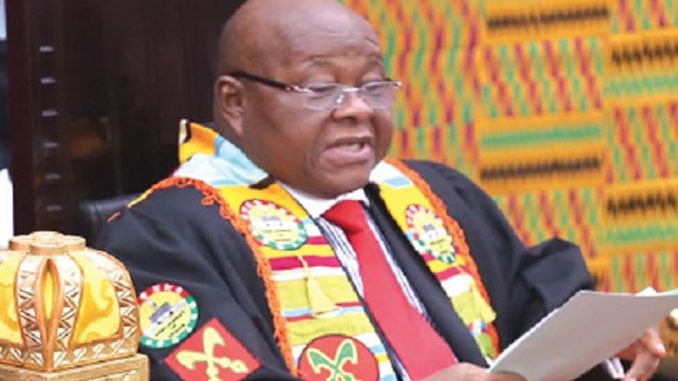 Speaker, Prof. Aaron Mike Oquaye, has insisted the House must sit, despite the pandemic, to ensure the continuous running of the state.

In May, it was alleged that two Members of Parliament and 13 Parliamentary Service staff had tested positive for the virus, but this allegation was swiftly denied by the House’s Director of Public Affairs, Ms. Kate Addo.

Subsequently, the country has seen rising infections, with a number of government officials also contracting the virus. Both President Nana Akufo-Addo and Chief Justice Kwasi Anin-Yeboah are currently self-isolating after some of their staff tested positive for the virus.

According to the Ghana Health Service, about 400 new positive cases of coronavirus are being recorded every day in the country.

On Friday, Member of Parliament (MP) for Kumbugu, Ras Mubarak, enquired on the floor of the House what new measures had been taken for the protection of MPs and staff.

Responding, the Speaker said Parliament’s chamber had been fumigated earlier, with a second fumigation exercise scheduled for Monday, July 13.

However, Prof. Oquaye expressed worry about some auxiliary staff of the House who continued to come to work in spite of instructions they had been given to stay at home.

“I have been advised that a few people have broken the instruction,” he said. “Some staff insist on coming to the House, and one person said his honourable member told him to come. Honourable members, this is the last warning. If any person engages a staff by way of research assistant and all those people who have been asked to stay at home, that person will be disciplined,” he warned.

On calls for the closure of Parliament, the Speaker stated: “Parliament is not like many other places that you can simply and easily say we have suspended or closed down. Very soon the Minister for Finance is going to read the supplementary budget. If Parliament doesn’t sit, the country will shut down. There will be no money; it’s as simple as that. For Parliament, let us know we are in a very peculiar situation.”