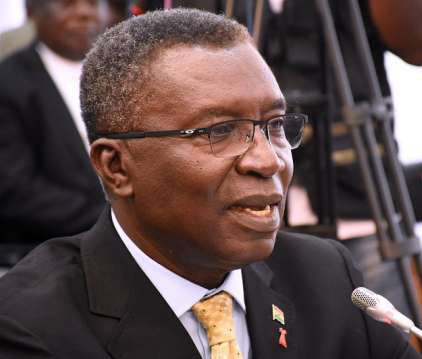 The Minister of Environment, Science, Technology and Innovation (MESTI), Professor Kwabena Frimpong-Boateng has rejected calls for his resignation over the galamsey fight.

During a media interview after the delivery of President Akufo-Addo's State of the Nation Address (SONA) in Parliament on Thursday, Prof Frimpong-Boateng said the work he has done so far does not need him to resign.

â€œfor what purposeâ€¦I have told you, you are asking me about what I have done so far, and I have given you a rundown. Do you think that given the assessment, I should resign?"

He said he has achieved about 70 percent success in the fight against illegal mining.

Responding to alleged reports that his son is involved in galamsey activities,Â Professor Kwabena Frimpong-BoatengÂ â€œhe [son] is not.â€

When pressed further on what his son was involved in, in respect of mining, Prof Frimpong-Boateng retorted, â€œhe is not involved in anything [mining], the world will get to know very soon.â€

Gov't will not shield anyone found guilty in missing excavators saga - Prez. Akufo-Addo

President Akufo-Addo says his government will not shield anyone who is found guilty in the missing excavators saga.

The President said this while delivering the State of the Nation Address in Parliament today February 20, 2020.

He said anyone found guilty will be made to face prosecution irrespective of their party affiliation.

"Operation Vanguard has been successful and over 4000 miners have received training in sustainable mining. 1200 illegal mining machines were seized and a number of these machines are missing, police made arrests and no one will be shielded if found guilty irrespective of their political affiliation".