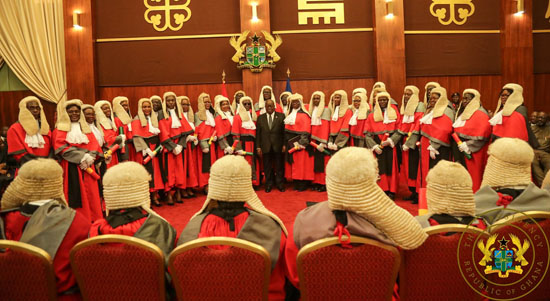 According to the latest survey by Afrobarometer, more than eight in 10 Ghanaians (85%) say at least some judges and magistrates are corrupt.

This includes 40% who say this about â€œmostâ€ or â€œallâ€ of these court officials, according to the report.

Afrobarometer studied judicial systems in some countries across the continent as part of its objectives to â€œprovide reliable data on Africansâ€™ experiences and evaluations of quality of life, governance, and democracy.â€

The Judicial system in 2015 had its image dented when undercover journalist, Anas Aremeyaw Anas released a piece where some judges were caught engaging in bribery to manipulate cases in giverâ€™s favour.

This led to the dismissal of some of the judges and has since courted some level of disaffection among some Ghanaians towards the courts.

The Akufo-Addo led government since assuming office has tried to give the judiciary a facelift through the introduction of initiatives such as the e-justice system, improvement in infrastructure and a paperless system to focus on transparency and accountability.

But these efforts targeted at weaning the corruption perception are still not enough has Ghana fell from the first position in 2018 to sixth in the World Justice Project, 2019.

Ghana Center for Democratic Development spearheaded the Afrobarometer team in Ghana to interview over 2,400 adult Ghanaians between September 16 and October 3, 2019.

According to the report released on Friday, February 28, 2020, â€œmore than three-fourths of Ghanaians say the president â€“ and ordinary citizens â€“ must obey the courts and laws.â€ It, however, stressed that â€œfewer than half of respondents say they trust courts â€œa lotâ€ (16%) or â€œsomewhatâ€ (32%).

Read the full statement survey below: