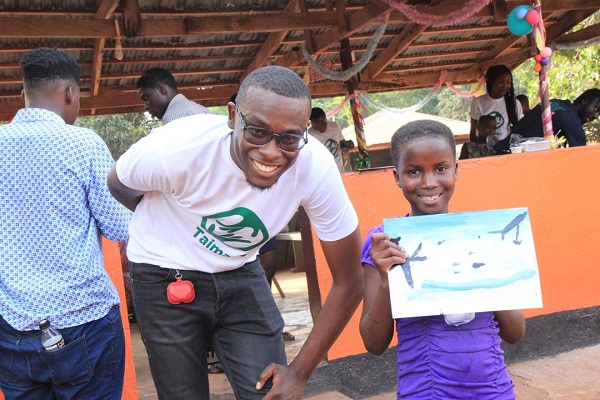 An Accra-based non-governmental organization, Taimako Foundation in December 2020 donated some items to children at the Christ Faith Foster Home at Frafraha.

Abandoned children are left to wander the streets of Accra with cupped hands in hope of finding a ‘Good Samaritan’ to show compassion. Many of these children by virtue of their vulnerability are exploited and drawn into untoward behaviors by adults who should know better.

The unregulated street appeal for alms industry, has become a conveyor belt for churning out deviants and societal misfits. The rippling effect is dire to our nationality security and human capital development efforts.

Taimako identifies with institutions and organizations that are putting in efforts to remedy this challenging problem. Taimako Foundation has resolved in bringing social inclusivity to institutions like the Christ Faith Foster Home that provide a safe haven for abandoned children that plague the streets of Accra.

As part of their agenda to push their behavioral impact schemes, the Accra-based NGO donated some items and engaged with the children through some interactive, mind engaging exercises like painting, karaoke and poetry. Mr. Abdul Fatah Maigah Mahama, the founder of Taimako expressed that the idea behind engaging the children in these interactive exercises is to induce a form of psychotherapy to the children and to tap into their undiscovered creative talents.

“This we hope provides the children with an avenue for expression, not only on the blank canvas but in their everyday lives”. He further stated that “It is important that children from young tender ages are granted the opportunity to express themselves by any means possible, it is a powerful tool which we resolved would be a prudent gap-bridger in childrens engagement with society.

Mr. Abdul Fatah Maigah Mahama again emphasized the importance of expression for these children. “In a society where the marginalized are not given the platform to voice out their opinions, the painting exercise with the children provides a good space to learn to communicate in creative ways, this also encourages them to carry on expressing themselves on whatever platform or environment they happen to find themselves”.

In addition to the interactive exercises, Taimako Foundation donated items worth over Five Thousand Cedis (Ghc5,000). This includes boxes of drinks and water, box of sausage, bags of rice, sanitary supplies, detergents, food supplies, footballs, clothing, packs of Papaye and painting supplies. Mr. Abdul Fatah Maigah Mahama went on to say “the importance of giving back to the community, and that this was only the beginning of things to come, as future visits to the Home and similar setups were already in the works. “This is to ensure that the bond between the two institutions remained fortified for as long as both establishments continued to exist”

In addressing the Taimako team, the caretaker of the institution expressed his deepest appreciation for the donated items and applauded Taimako for its interactive session with the children. “This was not like any other donations of items'', the intentional effort to engage and interact with the children through the painting exercise, and sing-alongs jolted a sense of neighborliness between Taimako’s representatives and the children of the Christ Faith Foster Home.

This was a much-needed change from the ‘usual’ donations they receive. The painting exercise served as an opportunity for potentials to be identified for further encouragement to hone their talents and possible future support”

In instances like this, it is crucial that Taimako’s driving message is not pushed under the carpet; “Taimako is helping to create an inclusive society” was subtly reverberated through the exercise.

The future of our communities relies critically on our ability to bring every comprising group of people on board, regardless of background, ethnicity or living circumstances.

It is our responsibility as Ghanaian citizens to ensure that nobody is left behind or abandoned. This is the driving message that Taimako hoped to push through with this engagement exercise.