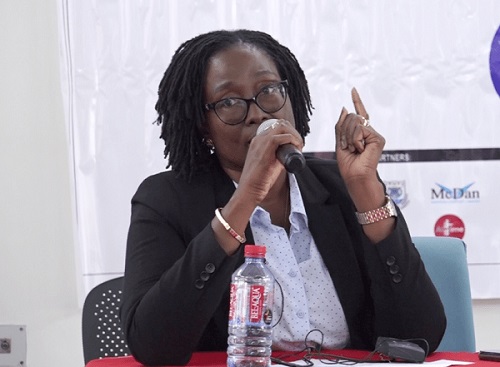 A driver of the Ghana Ports and Harbours Authority (GPHA), Amos Apraku, who is the complainant in the case of the deceased Marketing and Public Relations Manager of the Tema Port, Mrs Josephine Asante, has been apprehended and remanded in prison custody.

The driver, Amos Apraku, who appeared before the Tema TDC Magistrate Court, presided over by Mrs Akosua A. Adjepong, yesterday, was remanded to reappear on February 14, 2019.

The first accused person, Christian Adjei, 22, was also remanded by the court. He is facing committal proceedings for the alleged murder of Mrs Josephine Asante, in prison custody to reappear on February 14 2019.

The police prosecutor, Chief Inspector Beatrice Ayeh, told the court that the docket on the case was sent to the Police Headquarters in Accra but was returned to her last Thursday morning without the fact sheets.

Chief Inspector Beatrice Ayeh did not state when the complainant-turned-accused person was arrested but indicated that his (Apraku’s) semen, footprints and fingerprints had been retrieved for analysis and examination at the Police Forensic Laboratory and the results were yet to be received.

She said the fact sheet and the forensic report would be made available at the next sitting. On January 17 2019, at the court’s last sitting the prosecutor told the court that Apraku was an employee of the GPHA and driver of the deceased.

She pointed out that, on January 12, 2019, Mrs Josephine Asante attended a get-together organised by the GPHA at its Senior Staff Club House at Tema Community Six and that about 11:30 p.m. the accused drove her from the party towards her house.

However, she said, the driver was said to have alighted at Michel Camp and handed over the keys of the Mercedes Benz saloon car to Mrs Asante to continue the journey to her home at EMEFS Estates by herself.

Inspector Ayeh told the court that about 8:30 a.m. on Sunday, January 13, 2019, the first accused person, Adjei, who is the deceased person’s house help, and her 12-year-old son, tried opening Mrs Asante’s door but found it locked. They, therefore, called Apraku.

According to the prosecution, Apraku found the keys to the room at the entrance of the gate when he got there on receiving the call and used same to open the deceased’s door, only to find her in a pool of blood.

The prosecutor told the court that investigators who were assigned to the case after the complaint was lodged collected semen found in her (deceased), fingerprints and other evidence at the scene. Adjei’s remand follows a request by the prosecutor that Agyei’s semen, footprints and fingerprint be analysed at the Police Forensic Laboratory.

Meanwhile, some colleagues of the GPHA driver have expressed shock at the turn of events.

According to one of them who was at the court, Adjei’s wife, who was heavily pregnant, had to deliver prematurely after her husband was picked up by the police.