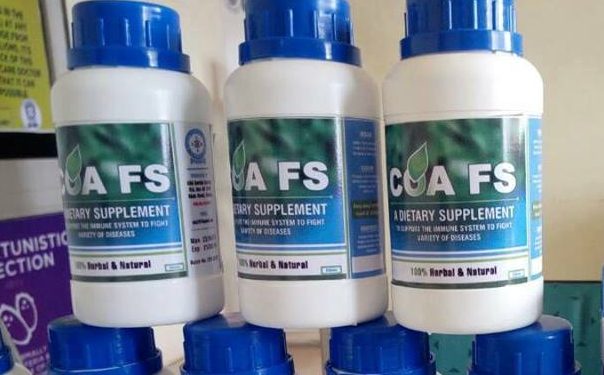 Test results from the Council for Scientific and Industrial Research prove that COA FS Food Supplement is not contaminated as claimed by the Food and Drugs Authority.

The FDA ordered the Centre of Awareness Global Peace Mission, manufacturer of the COA FS drug, to recall the food supplement from the market back to the point of sale.

COA FS became a much sort after drug when COVID-19 surfaced because many believed it was able to boost the immune system which could prevent one from contracting the deadly virus.

According to the FDA, laboratory analysis on random COA FS products picked from the manufacturing company and the market, showed that the product had been found to contain Escherichia coli, a type of bacteria that normally lives in the intestines.

COA FS rejected the test results and demanded to conduct their private test.

The results of the microbial tests for the identified samples with batch numbers CFA00003 and CFS00004 did not disclose contamination by Yeast, Mould and E.coli as indicated in the FDA press statement.

Below is the test result 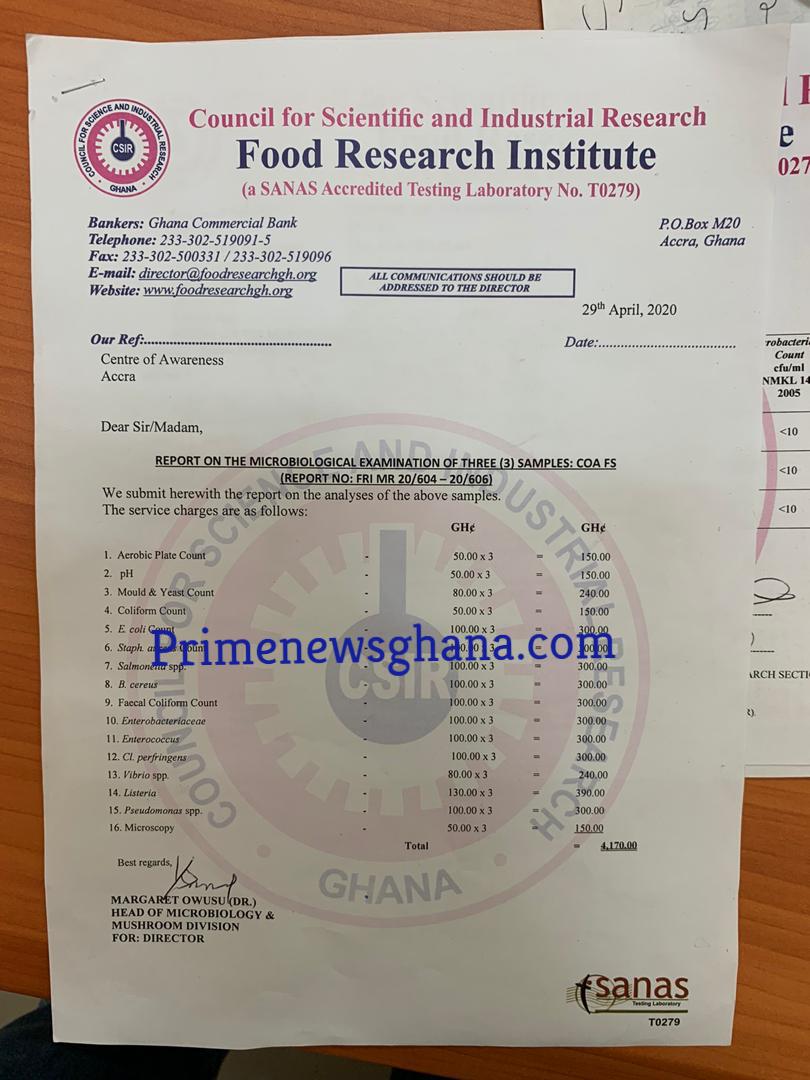 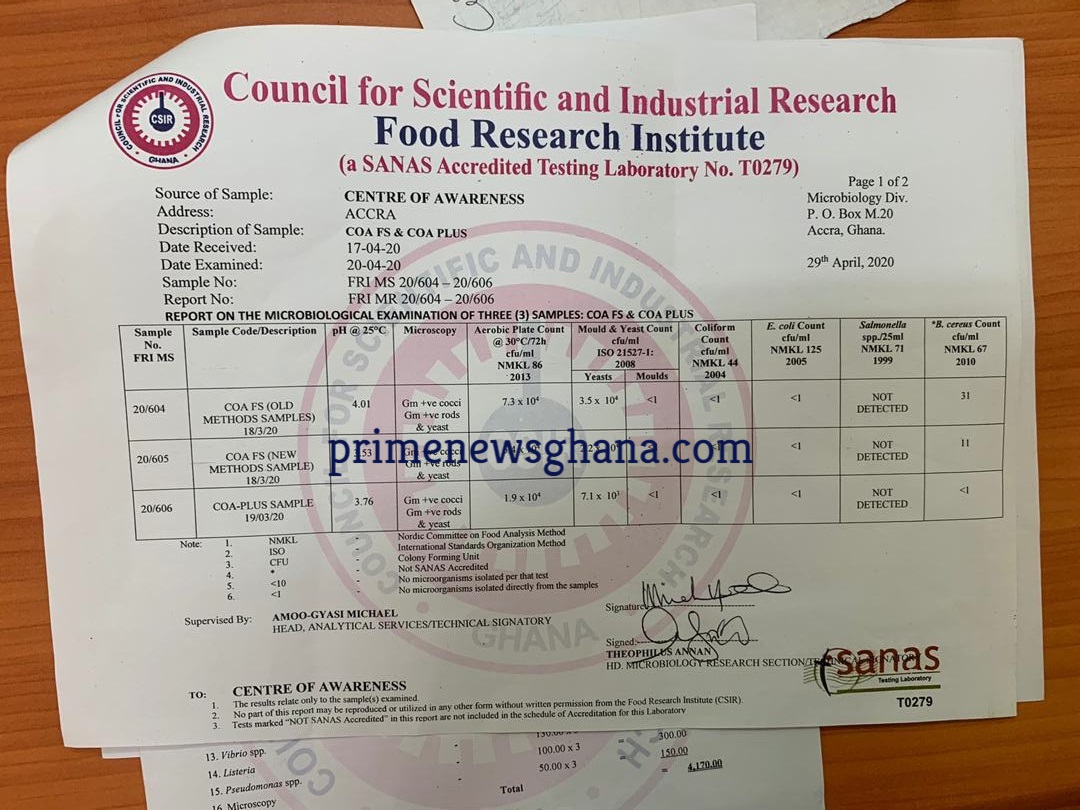 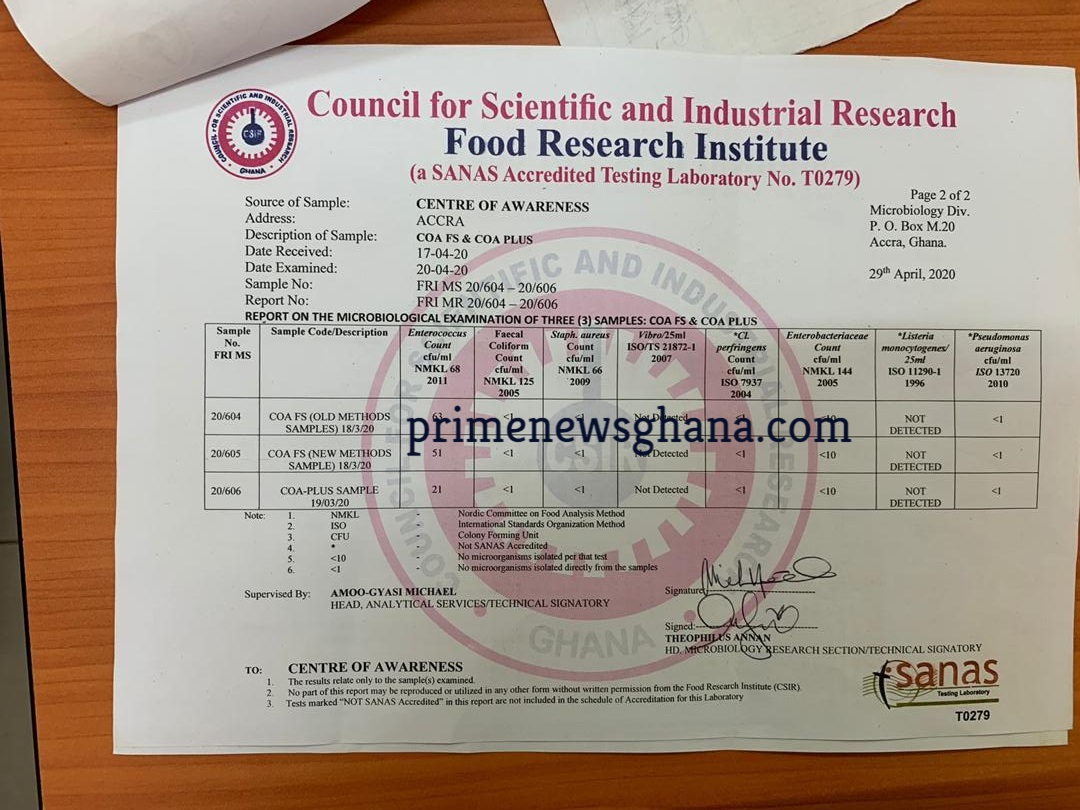 This is the second independent test the Centre of Awareness Global Peace Mission, is conducting on the product since the FDA said it was contaminated.

The company in an earlier statement said tests ran by Cape Coast Teaching Hospital’s laboratories on the back of these claims showed the non-existence of the said substances in COA FS.

They then said they were conducting further tests in other independent laboratories and they have now come out with the results.

READ ALSO: We trust our results and still stand by it - FDA to COA Herbal

The FDA after COA FS first debunked their claims that the drugs were contaminated stood by their own test results and said they do proper checks before coming to make public announcements.

Head of laboratories at the FDA, Eric Kakari Boateng urged COA Herbal to submit their own test results to the FDA for the necessary next line of action to be determined.

However, Prime News Ghana reached out to experts and they explained that there is still some form of contamination in the COA FS drug per the test results available.

Kwame Sarpong Asiedu and expert in the field of medicine said there is still some form of elements that makes the COA FS drug unwholesomeness.

He said: I have seen a few microbial test certificates supposedly originating from the Food Research Institute of the Council for Scientific and Industrial Research and commissioned by Center for Awareness relating to COA-FS. Apparently, this is being used as evidence of the wholesomeness of the product in an attempt to debunk the claims made by the Food and Drugs Authority (FDA). My first observation was the presence of significant amounts of Enterococci (gram negative bacteria often found in the human gut and faeces). This is a contaminant that is used together with E. Coli to estimate the presence of faecal matter in drinking water and liquid medicinal products. For water to be consumed by humans, the limit for Enterococci is not more than 35 cfu/100mL. This must not be different for medicinal products to be consumed by humans. An inspection of the certificates in circulation indicates that all three samples had counts greater than 20 cfu/ml or 2000 cfu/100ml. A clear read flag for any practitioner in the area of pharmaceutical quality control.

Other contaminants that were found as per the certificates included yeast (fungi) with counts that suggest that significant fermentation of the product could occur between the time of production, storage and sale. Thus making the product unwholesome for the consumer. There was also aerobic bacteria detected in high amounts. Two other red flags.

For me these microbial certificates if anything, confirm the position of the FDA and justify why the mass product recall was ordered. This is because at no point in all correspondence I have seen does the FDA question the efficacy of COA-FS as an immune coaster. Rather they acted because of the risk these contaminants pose to the general public. A situation these certificates from the Center for Awareness on COA-FS put beyond doubt.