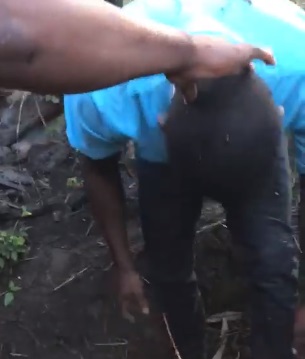 A video of how the police retrieved weapons stolen from some suspected Western Togoland secession group in a recent attack has emerged.

The weapons were stolen by some men believed to be members of the Western Togoland secession group during an attack on the Aveyime and Mepe Police Stations in the North Tongu District of the Volta Region.

The armed men simultaneously took over both police stations, overpowered the police officers, and stole the weapons which were in the armoury.

The Ghana Police Service, in giving an update on the matter indicated that the stolen weapons were retrieved on Friday, September 25, 2020.

“The vehicles, weapons and other items seized or stolen by the “elements” on Friday 25th September 2020 have also been retrieved.”

The Police reiterated that they were in control of the situation and that life had returned to normal in the affected regions.

“Security agencies wish to reiterate that adequate security is on the ground in the affected areas in the Volta, Oti and Eastern regions and all other parts of the country. Life has returned to normal as residents are going about their daily activities without fear of insecurity,” part of the statement reads.

They also indicated that thirty-one persons in connection to the disturbances have been arrested have been provisionally charged and presented in court for allocation.

“The general public is being assured to remain calm as security agencies will continue to count on their assistance to arrest all perpetrators to face the law,” the statement added.