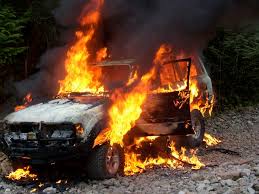 Irate residents of Sefwi in the Bodi District in the Western North Region have set ablaze a Toyota Land Cruiser.

This was after the driver of the vehicle crashed into three pedestrians.

The driver identified as Patrick Foakye is reported to have made a sharp turn on tough speed knocking down three residents returning home from their farms on October 4, 2020.

Two people Kwabena Enkua 42 and Hamza Adama 19 died on the spot and the third person is currently receiving treatment at the Komfo Anokye Teaching Hospital.

Some eyewitnesses say they heard people screaming that some people have been knocked down and they rushed to the scene only to find the bodies.

The driver meanwhile is said to have reported himself to the Sefwi Juabeso Police and remains in their custody.

Body of the deceased has also been deposited at the Sefwi Juabeso Government Hospital morgue.

In another accident development, National Democratic Congress’ (NDC) Bono East Youth Wing Vehicle has been involved in a head-on collision on the Kintampo-Techiman Highway.

According to reports, they were returning from the funeral of the mother of NDC’s Kintampo-South Deputy Youth Organiser, when the accident occurred around the Tuobodom toll booth.

The pick-up truck with the Regional organizers is said to have collided with an articulator truck loaded with fertilizer.