V/R: Woman killed in gory accident on her way to church 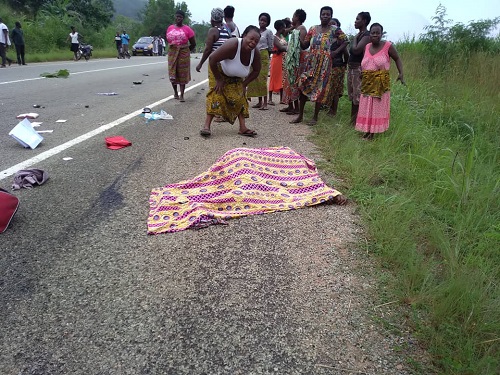 A woman believed to be in her 30s has died in a gory motor accident while on her way to church, two other men (passenger and motorist) sustained severe injuries.

The accident occurred few metres away from Matse Township in the Ho Municipality on Thursday morning around 7:00 am as they headed to morning service at a community church known as Heaven Chapel International.

Residents identified the woman as Ernestina Klu, a sexton at the said church and a petty trader. According to a sister of one of the victims, her brother and the woman boarded the motorbike from the town to attend the church for arrangements before mass attendees.

On their way, a green Hyundai van with registration number ER-4972-X believed to be speeding overtook and knocked the motorcycle.

Ernestina died on the spot, the rider sustained injuries on his ankles, knees and elbows while the third person is in critical condition.

The motorist was rushed to Matse Health Centre while the deceased and the other victims were sent to the Volta Regional Teaching Hospital.

Reports indicated that the woman was a single parent with two daughters, one of whom has recently completed Junior High School.