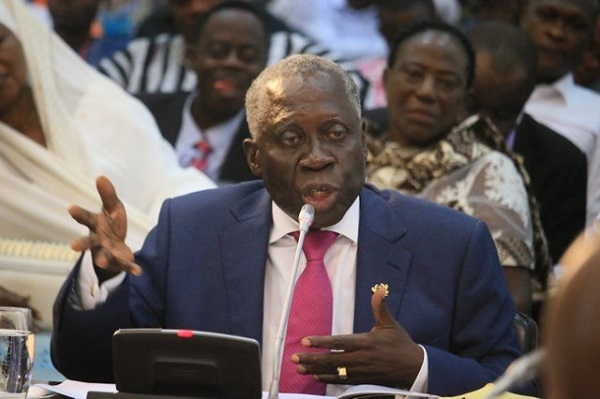 The Senior Minister Yaw Osafo-Marfo has instructed his lawyers to begin a formal legal process to challenge the Auditor-General's decision to surcharge him.

The Auditor-General, Daniel Yaw Domelevo, claims that the Senior Minister led government to pay a private firm Kroll and Associates $1 million for no work done.

A letter signed by the Senior Minister read: "I have today December 11, 2019, instructed my lawyers to commence legal processes to challenge the disallowance on surcharge imposed on me by the Auditor-General following his notice on October 24, 2019. I have taken this action because the evidence available shows clearly that the Auditor-General erred in law and professional procedures in the exercise of his powers regarding his audit on payment to Kroll Associates Limited. This legal action has been initiated on behalf of myself and four other officials of the Ministry of Finance. I am optimistic that the court will afford us the opportunity to prove the regularity of the said transaction and clear our names in the process."

Senior Minister Yaw Osafo-Marfo was surcharged over $1m for entering into an agreement with a foreign company without following due process.

The Auditor-General Daniel Domelevo said the Senior Minister has 60 days to go to court to seek an order setting aside his directive.

Mr Domelevo said Yaw Osafo-Marfo’s reply to his queries over a government contract with Kroll Associates UK to provide consultancy services was unsatisfactory.

By September 2018, over $1 million equivalent to ¢ 4.86 million was made to the company as full payment for its services.

But the Auditor-General has challenged the arrangement. He explained that by Ghana’s 1992 Constitution, the contract required parliamentary approval because it involved a foreign company.

His demand for proof of work done by Kroll Associates UK has also not been satisfied, he said. “We want evidence of work being done” not “assurances”, the Auditor-General insisted.

The letter from the Senior Minister indicated some examples of asset-tracing work done and also refused to reveal others, explaining they are “classified security matters.”

He also questioned the validity of a letter from the Senior Minister to show the contract also had approval from the Public Procurement Authority.

Daniel Domelevo explained that contrary to the Public Procurement Authority Act, the letter showed approval was given by PPA Management. It should have been approved by the Board in line with Section 40 of the Act, he said.

The letter again showed, that the purported approval was given to the National Security Secretariat and not the Senior Minister who entered into the agreement on behalf of government, he indicated.

READ ALSO: Auditor-General to surcharge some officials of GRA over unlawful tax exemptions

The ‘approval’ also came two months after the contract had already been signed, he said. The Auditor-General explained, the contract was signed on September 26, 2017, but the purported approval came November 14th 2017.