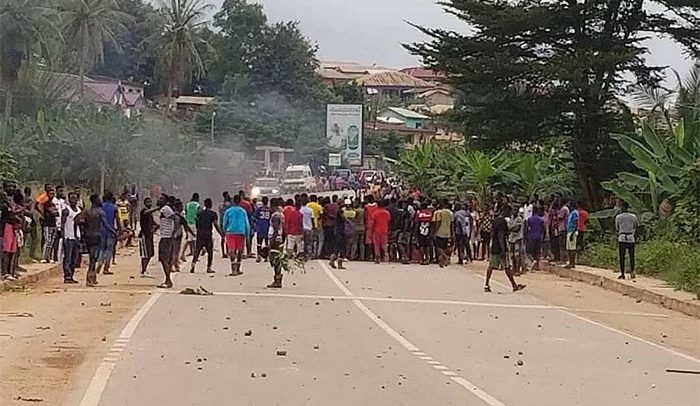 Youth of Labadi and Teshie in the Greater Accra Region have clashed with the task force ofÂ La Dadekotopon Municipal Assembly over a land boundary.

Reports indicate that there has been a land administrative dispute between the two towns(Teshie and Labadi) for some time now.

Giving more details about the incident on Starr FM today, the Teshie Police Commander Superintendent Osman Alhassan stated that: We received a call from the MCE for the Teshie district assembly that some men from Labadi came to Teshie to erect a signboard to separate the boundary between theÂ Ledzokuku district assembly and La district assembly. With that, the youth from Labadi mobilized to attack them and vice-versa. So we quickly came here to settle the issue.''

READ ALSO:Ho: Youth on rampage as they burn Assembly vehicle over death of resident

The Police Commander also advised the two parties to hold their peace as the Service finds amicable ways to settle the matter. He added that the Police is working to restore calm to the tension-filled area.

One of the protesters of the Teshie electoral area Baah said: ''I was in the house last week Thursday and was called that people of LADMA have mounted their signboard with 'Welcome to LADMA' right in the middle of LEKMA. The boundary between Labadi and Teshie is the Kpeshie stream, and to claim ownership of the land which is not part of theirs, people of Teshie ignored the stream which is the boundary between the two areas and mounted their signboard right in the middle Teshie. So quickly I had to call my people because the MCE was not around. We called her and informed her about it, she also told us to wait for her to return and luckily for us she came in yesterday so we had to mobilize our people to come to the site and claim what rightly belongs to us''.

On his part, the Assemblyman of the area, Charles Kotei said irrespective of the intervention by the taskforce to calm the situation, youth from Teshie who were involved in the chaotic scene were injured and have been taken to the LEKMA hospital.Â

He further indicated that no one has been arrested following the chaotic incident between the youth of the two areas.