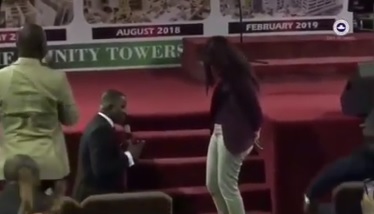 A Nigerian man has given girlfriend the surprise of her life last night when he proposed to her during service at the Redeemed Christian Church of God, City of David parish, Lagos yesterday May 7th in Nigeria.Â

In a video sighted online, the young man was seen making his intention to marry his girlfriend known in front of God and his people â€“ and got just the perfect answer! Before he knelt down to ask for her hand in marriage, the coolly-dressed lover man gave a simple speech about the first time he set eyes on Chisom, the shy lady to whom the surprise proposal was being made.

They were in church together for the Tuesday night service with the assistance of his pastor, the groom-to-be called his bride to come to the front of the church, where he asked for her hand in marriage.

â€œItâ€™s a fulfilment of my dreams,â€ he said, revealing how she caught his attention in 2015 right in the church and few metres away from where his proposal is being made. Iâ€™m not ashamed of her; sheâ€™s become the love of my life and I want to publicly declare it,â€ he said before fetching the box from his pocket and asking the magic question to which Chisom answered yes.