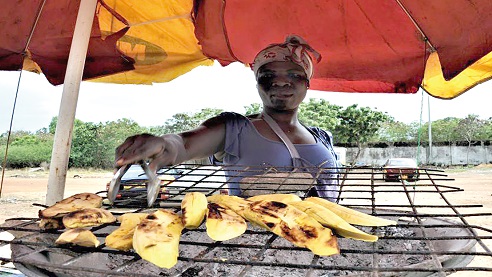 There are two words that stand in stark contrast to each other per their application within the Ghanaian context. These words are ‘local’ and ‘international’.

Unfortunately, foods meant for the palate of Ghanaians do not have any means to attach international to them; and because of that, any attempt to let Ghanaians respect their own local foods has always come with a challenge.

Notwithstanding the nutritional values that our local foods are imbibed with, we have classified majority of them as poor man’s food. Because of that, we shy away from most of these nutritional foods the moment our thinking tells us that we do not belong to the poor category. Foods such as gari, beans, koko, kokonte, roast cassava or plantain fall within the category of foods considered by Ghanaians as “the poor man’s food”, probably because they are always in defiance of market forces. They have always remained affordable to the poor whether demand is high or low.

People who have migrated to the so-called middle class try to shun them as much as possible to reflect their newly acquired social status. Fried rice and chicken, Italian pizza, spaghetti and the other packable foods that have become so common now take precedence over banku, kenkey and other locally prepared delicacies considered too local.

Most of the local foods hardly find their way to the corporate environment where these middle-class people work because they are not considered fit for the office table, cannot be properly packaged and also leave strong smell in the hands and mouth after consumption. After all, they are not designed with fork and knife in mind.

One of the local foods within the category of poor man’s food that has braced all odds and discrimination against our locally prepared foods is the roast plantain accompanied by roast groundnut, known among the working class within the formal sector as Kofi Brookman. Actually, the Brookman is a corrupted form of the words broke man (a poor person).

Roast plantain or Kofi Brookman has managed to break into a territory where it should otherwise be shunned and rejected. Roast plantain is definitely a poor man’s food. The nickname the working class has given it suggests so. It is a dry food of carbohydrate balanced by protein from the groundnut that accompanies its consumption. Most of the time, water is needed to wash it down the throat.

It is not food you stand behind a pristine counter of a branded food joint manned by a trained salesperson to buy. Its packaging is very simple. All you need to carry it away is a sheet of paper, most of the time from a used exercise book, old newspapers and discarded office documents. Vendors are just simple local women, most of them without any formal idea of food safety, customer service or personal appearance. With a simple makeshift fire stand situated along a roadside, the seller of Kofi Brookman is ready for business.

Ironically, the customers of this particular food are not just the poor. People in high positions occupying big offices patronise Kofi Brookman.

Some of them stop their expensive cars along streets to buy Kofi Brookman. For some office workers, it is a quick way to satisfy lunch demand if there is a lot of work to be done in the office. That means Kofi Brookman will sit right on the office table as it is being enjoyed, a privilege that most local foods will only dream of.

It is a food from humble background, lacking proper packaging, very common and affordable; indeed, a typical local food for the common man. What is there in Kofi Brookman that has won acceptance from that domain it does not belong to – the middle class and their corporate environment?

The writer is with the Institute of Current Affairs and Diplomacy (ICAD). E-mail: Lawmat2014@gmail.com