Pele: The player who united a nation 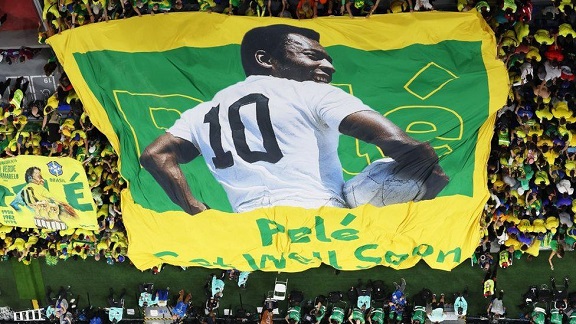 Outside the Albert Einstein hospital in São Paulo, fans started gathering when they heard the news of Pele passing. Some were dressed in the number 10 shirt Pele wore when playing for Santos. Outside a banner had been draped that read "Eternal King Pele".

This is a moment that Brazilians had been expecting for some time but also dreading. In recent weeks, Pele's daughter Kely Nascimento had taken to Instagram to keep his fans updated about his condition - every post or story fervently followed for any news of "O Rei" ("The King" in Portuguese).

When news eventually came of his passing, it was still a big moment. The hospital issued a statement confirming his death from multiple organ failure connected to his colon cancer but it was more than just a medical bulletin - it also said that the hospital shared the suffering felt by the family and everyone over the loss of "our beloved King of football".

That is a mark of just how important he was for Brazilians - while Pele was of course a footballing legend the world over, for people here, he was so much more.

President-elect, Luiz Inacio Lula da Silva, who is due to be sworn in on Sunday, said he had had the privilege of seeing Pele play, although he added it wasn't merely "playing", it was a "show".

"Few Brazilians took the name of our country as far as he did," he said in a tweet, adding that there was never another number 10 like him.

For every Brazilian, Pele meant something. The older generations remembered him as a player, the younger Brazilians were told about his phenomenal skills - but he united people in this footballing nation.

This is a country that defines itself by football. During the World Cup, Brazilians are given leave to watch their national team. Pele was cheering them on from his hospital bed, wishing them well. And so his death coming after the tournament he won three times is even more poignant.

These past few weeks, Brazilians have had time to reflect on his life, knowing that his condition was worsening. Even people with no interest in football refer to him as the King.

He was a footballer that stayed very Brazilian, playing for Santos for many years rather than playing for clubs abroad. In fact, president Janio Quadros in 1961 even declared him a national treasure, which meant for years he couldn't be "exported" to play for clubs abroad, such was his hero status and importance for national pride.

In a country where racism and classism are still so dominant, Pele, a black footballer from a poor background, was an incredible success story. He rarely talked about racism, a stance that he was at times criticised for. But he always championed the power of football to bring the nation together, to give opportunities to even the poorest Brazilians.

Pele was also known to keep his head down when it came to politics. Again, many felt that was a weak position given his huge influence - and of course the turbulent politics that he lived through - including a dictatorship. But in a country that has once again become increasingly divided when it comes to politics, this silence also allowed him to transcend politics, to be loved and respected universally as the King of all Brazilians, both on and off the field.

The greatest footballer of all time has now gone, but his memory here in Brazil will remain forever.