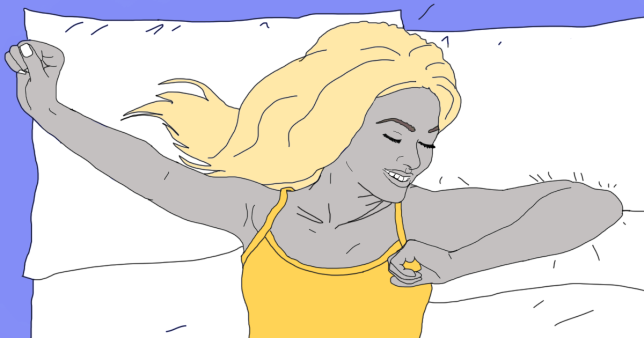 Women describe what an orgasm actually feels like
Shares

Orgasms are pretty hyped up. The female orgasm is generally regarded as a magical, mysterious thing. It’s tricky to attain. It’s the best feeling on earth. It relies on all kinds of intriguing bits like the G spot and the clitoris. But what does it actually feel like? As you might expect, it’s different for different people. But the overall sense is that it’s rather nice. We asked a bunch of women to describe what exactly an orgasm feels like for them.

Rebecca, 27 ‘An orgasm feels a bit like the nice scratchy tickling feeling when someone strokes the inside of your arm, only way more intense. ‘It tends to build from moderate to really intense, and when you actually come it’s like a powerful rush which slowly subsides. ‘The sensation is closest to getting a really great massage, but with a sharper sensation.’

Jess, 26 ‘You just forget about everything shite for a moment, and the physical and mental kind of merge and it’s all good. It’s like a wave through your whole body that makes you lowkey high and completely glowy. ‘Basically if you’re wondering if you came you definitely didn’t because you could never mistake the feeling.’ Molly, 27 ‘I would say what I have felt is akin to finally scratching the itchiest itch.’

Amber, 34 ‘I think it feels like a massive release, and a way to be out of your own body for about ten seconds (I don’t know if that’s how long they last, it’s probably less than that, right?). ‘I don’t think it feels in any way like a sneeze, BUT the build up and release is similar but much much more satisfying.’

Corinne, 33 ‘It feels like an all-encompassing avalanche.’ Kelly, 32 ‘A tickly explosion.’

Sammi, 30 ‘The best way to describe it is like a very intense, pleasurable sneeze. It’s like a release but because you’re not technically ‘releasing’ anything so it’s hard to explain. ‘On top of that you get a really warm fuzzy feeling throughout your body. A bit like after you have the first few sips of a really good gin and tonic. ‘If it’s a really good one your body kind of shudders and your clit kind of pulses and your cheeks feel hot.’

Kate, 28 ‘If it’s really intense I hysterically laugh after as the emotions all pour out of me. Or my eyes squeeze shut because I feel like I am going to cry and I can’t open them for a few mins.’

Abby, 34 ‘Well the feeling after is like when someone jumps out to scare you but then you realise it’s a joke and you feel satisfied that you’re safe. Like a deliciously tingly warm wave. ‘The actual orgasm is like an explosion.’ Claire, 33 ‘Like that loggers leap at Thorpe Park – Up up up intense intense and then boooooom splash a rush.’ Beth, 27 ‘Bottom of feet tingle and burn when I am about to release, that’s a constant thing but a lot of orgasms are different depending of how much build up there was or how into it you are feeling etc.’

Phoebe, 28 ‘The climax feels like when you’re on the descent of a roller coaster, there’s a heartbeat in your groin and then suddenly you orgasm and it’s like jumping head first into a pool of pleasure.’

Niamh, 26 ‘My spine tingles and I feel a massive euphoric feeling over my whole body and sometimes my vision goes blurred.’ Camilla, 26 ‘It starts in my legs and moves up, my heads starts throbbing everything is pulsing I feel like might burst and I’m always a little scared.’

Chloe, 29 ‘It just feels really warm, if that makes sense. Like, the warmth when you tuck yourself into a blanket – just really warm and comforting all over my body.’

Tina, 27 ‘It’s a release. It’s like you’ve got really tense without noticing, then you hit a threshold and all the tension floods out.’

Pippa, 28 ‘At their best it is absolute euphoria where your entire body is in sync. A warm and intense pressure that builds and builds. If it’s at this level it is the best feeling in the world.’

Ella, 24 ‘What I imagine the physical embodiment of euphoria would be like.’ Sarah, 31 ‘My description of an orgasm is that it feels like a warm sensation crawling all over your body.’